Firecrest... 4 years in the making

Every birder has a bogey bird. That one species that, no matter how hard you try, just likes to bugger off whenever you get within a mile of it.

With me, its the Firecrest. Ever since eagle-eyed patch birder David Campbell (click here for his blog, and here for his patch blog) found a wintering population along a small wooded path on his local golf course down in Banstead back in 2008, they have been back to the same spot every year since- as have I to see them, and year upon year, I've failed miserably. David would shrug it off at the time as bad luck, but oh no, this was something deeper. This was something personal between myself, and a vaseline tin- sized bird that was trying its utmost to stay off my radar.

And so the winter of 2012/13 descended, and as expected, the bastard Firecrests returned to their favourite location on Banstead golf course. However, instead of rushing down at the first hint of news, I chilled with a cup of tea (or a beer, one of those two). If there was ever a time I was going to see this bird, it would be in the New Year (fresh start, clean slate blah blah... all that cheesy crap), so I waited, and waited... and a few hours later, headed down there.

It was freezing on arrival, but there was still a lot of bird action going on. A flock of Long-tailed tit were slowly making their way down the path, and I stopped momentary to enjoy their acrobatics as they moved overhead with a very bright looking, funny crested, shorter tailed Long-tailed tit following behind- wait a minute- that's no Long-tailed tit, that's a... a... Goldcrest. So close.

A further 20 minutes of staring at bushes followed, before a sudden burst of squeaking from a holly bush deep within the shrubs grabbed my attention. It sounded like a Goldcrest, only louder, and much more insistent. After another lengthy period of time, a strong white eye stripe and flash of vibrant yellow finally came into view to clinch my first Firecrest... gotcha! As is compulsory, I fired off a few dozen shots, before realising that the camera was set to 'manual' mode, and every image had come out horribly over-exposed. Shiiaattt! A flick of the dial later and a miracle happened- the bird stopped and perched on one of the most well lit branches along the whole path, and this time I was ready for it. 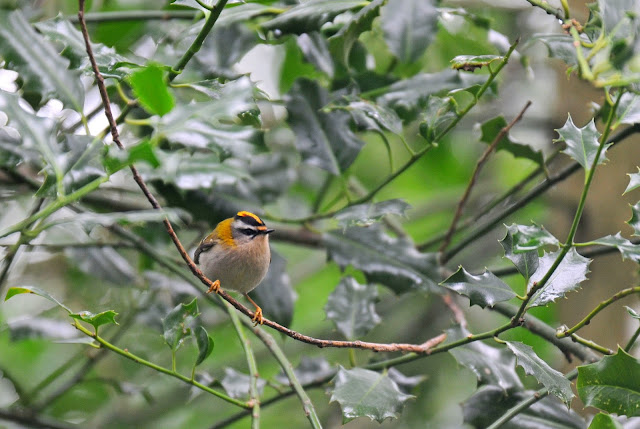 Alas, most of the 50 odd images that came out were too blurred/too dark, but I managed the one keeper above, and my index finger got a work out too, which was nice. Win win.
Email ThisBlogThis!Share to TwitterShare to FacebookShare to Pinterest

Just come across your blog, Bill. Stunning photographs and I'm reassured to read how difficult you have found nailing this Firecrest. I saw one here back in 2009 but after around 12 or more visits since I've failed miserably. Might try again this week at some point but cheesed off at staring at these wretched bushes along the path...!

I sympathise with you. For such a small area to be supposedly frequenting, they can be ridiculously hard to pin down. Either that or they do just hold some kind of birding grudge against us! Either way, keep trying mate.