A few weekends ago I nipped over to Aberystwyth to catch up with some old school friends. I got horribly lost on my home and ended up first at the Dyfi Osprey Project... 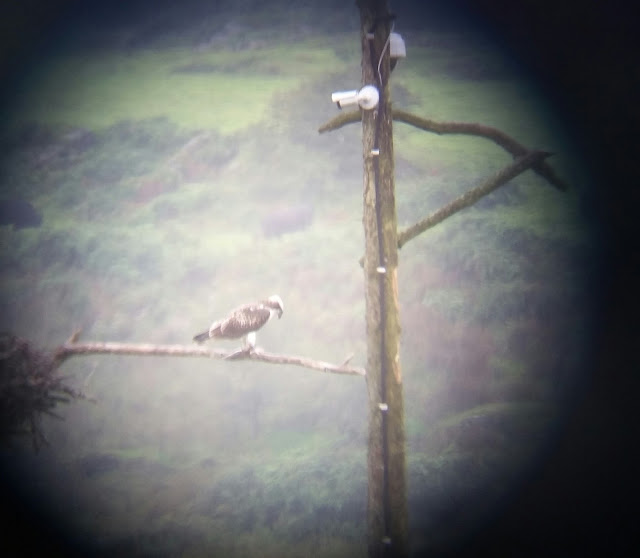 Then on the Minffordd Path heading up into the spectacular Cadair Idris mountain range. Nightmare! 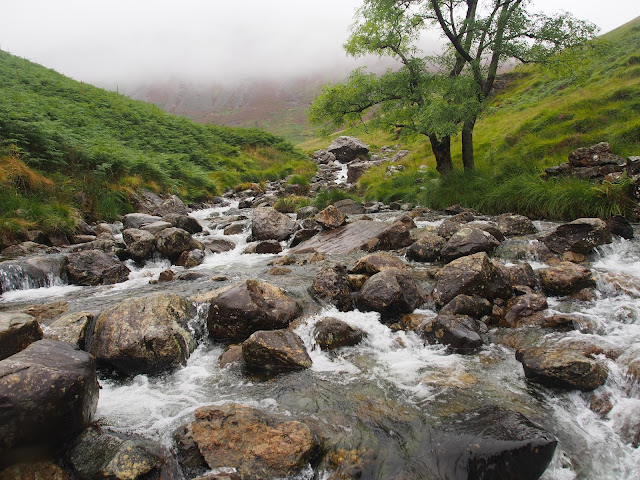 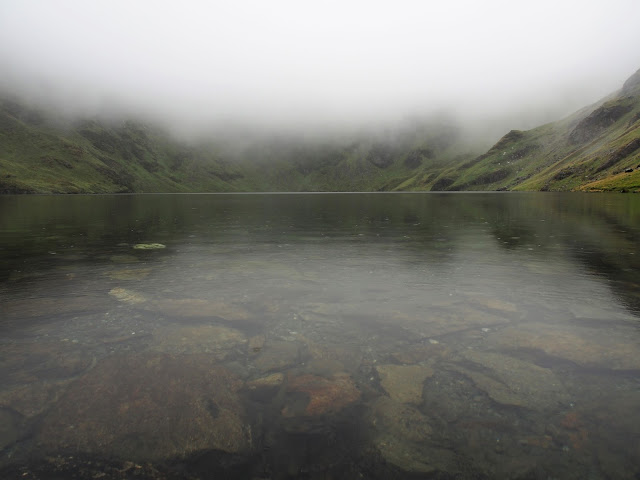 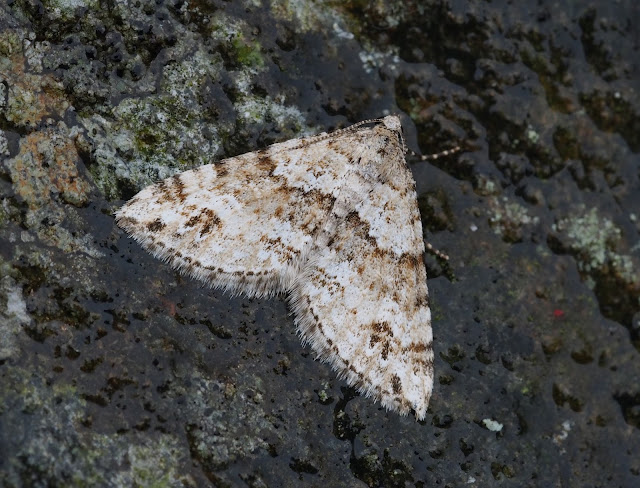 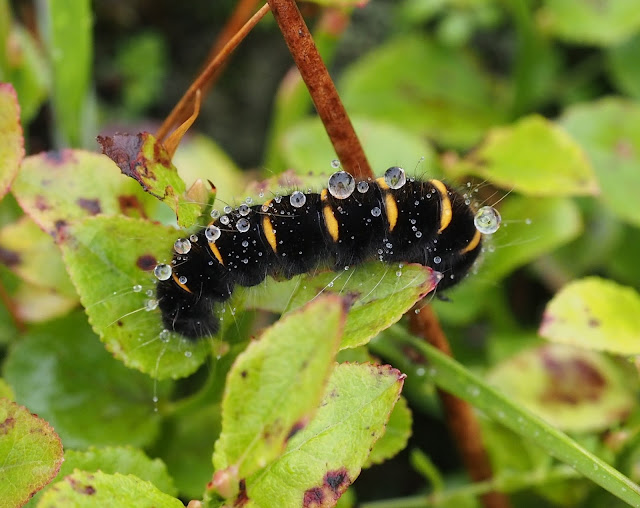 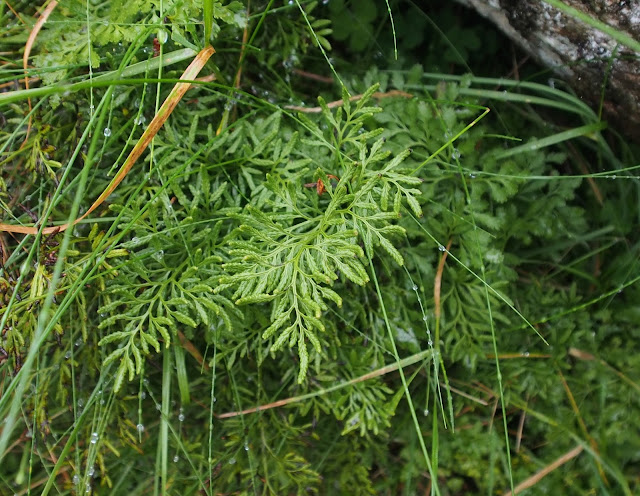 A night on the moors

Lulworth Cove is a popular tourist hotspot all year round but during the August summer holidays it becomes a whole new level of manic. The car park, over flow car park and back up overflow car park are filled by midday at the moment and the coast path to Durdle Door attains the kind of people traffic you'd expect along the Southbank in the run up to Christmas.

Walk anywhere off the beaten track (or up a steep hill) and you pretty quickly shrug off the majority of tourists, but the other weekend I opted for a complete change of scenery and took my tent down to Dartmoor for the night. I've been waiting for a chance to return ever since visiting for the first time back in June. The landscapes are entrancing and it's only an hour or so's drive from my base camp at Lulworth. 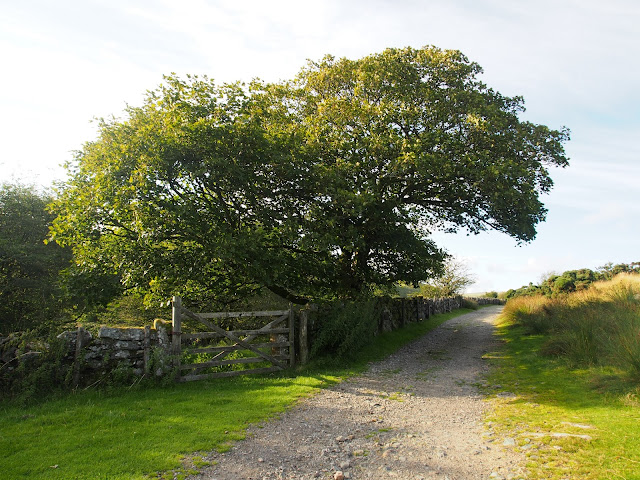 I parked up at Two Bridges, a secluded hamlet deep in the wilds of the Moor, and waved goodbye to the car. With tent, sleeping bag, tomato soup, tea bags, a stove and a pair of binoculars all crammed into my rucksack I set off off down a track and then onto a well-trodden path towards Wistman's Wood. 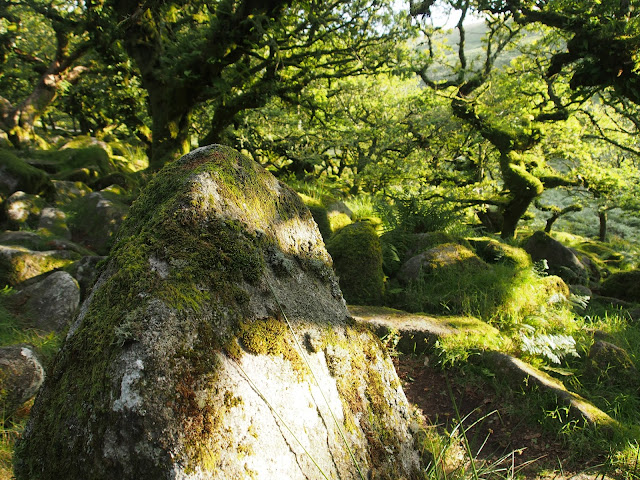 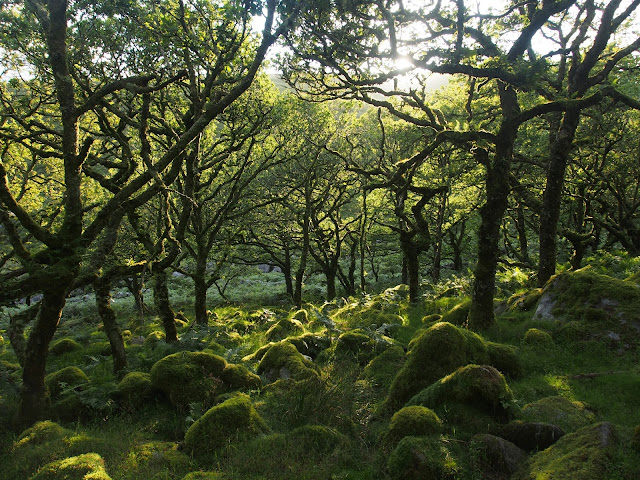 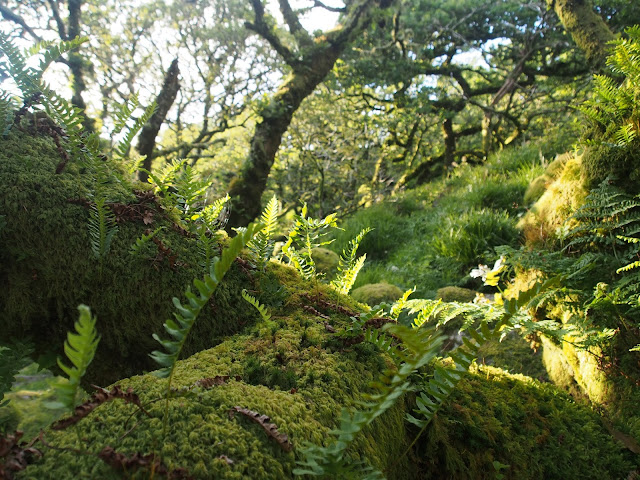 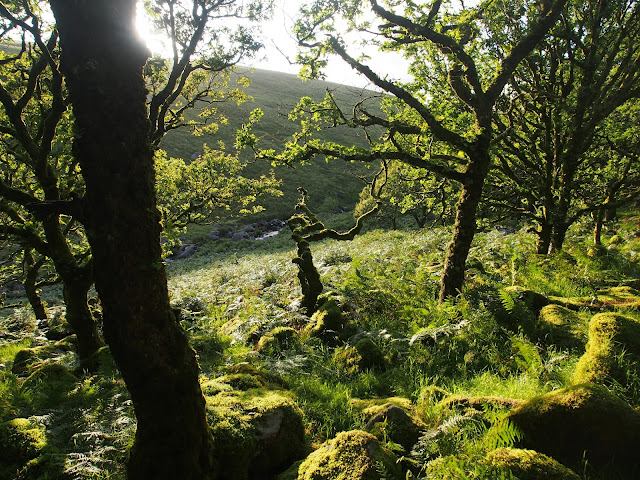 The sun was wavering just above Beardown Tor to the west as I reached the wood, gradually dipping below the hillside. I watched the shade line slowly creep up through the woods towards me and the dappled rays of sunlight on the moss-cladded oaks and boulders. I'd heard good things about Wistman's Wood, but this was magical beyond words. As much as I wanted to be able to say I'd kipped in such a bewitching spot, I've also heard creepy stories of pagan rituals and ghosts that encouraged the superstitious side of me to resist pitching the tent quite yet! 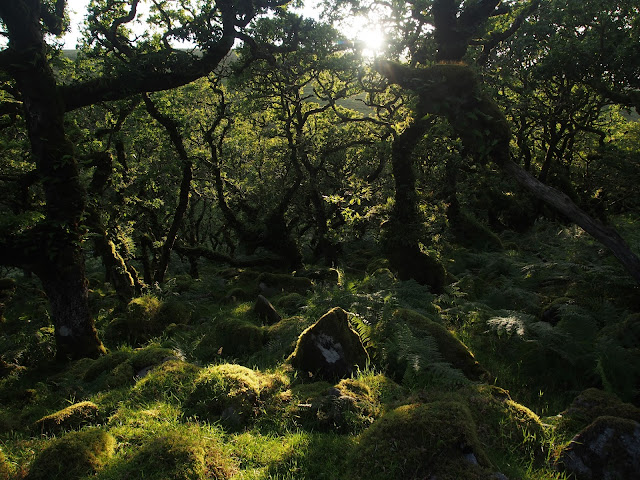 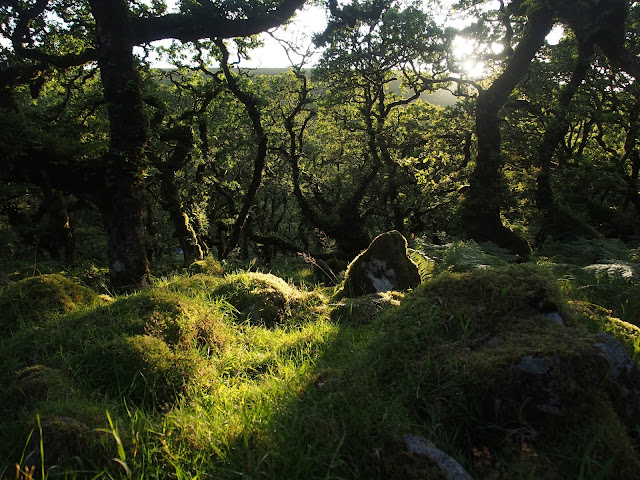 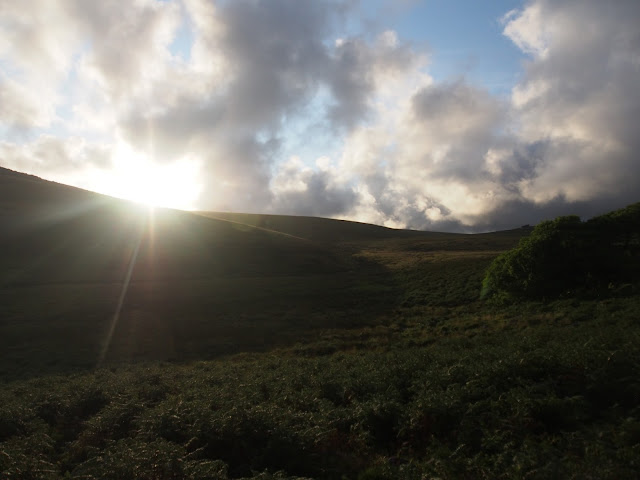 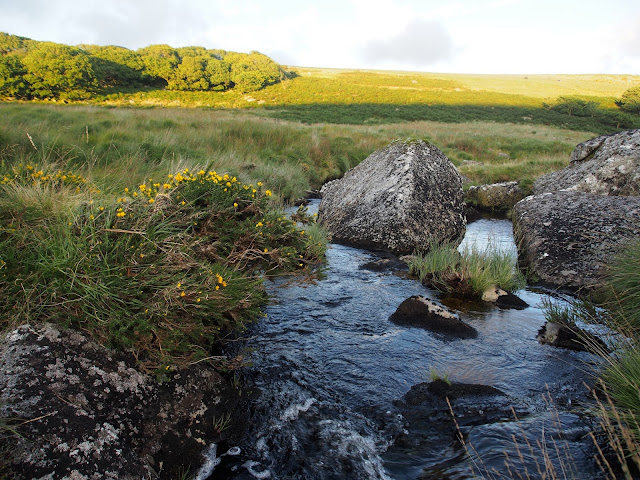 From the top end of Wistman's Wood I headed north-west up onto the moors. There was a Grasshopper Warbler singing somewhere amongst the tussocks of sedges and rushes, and a herd of testosterone-filled Dartmoor ponies were busy chasing each other around the hillside. 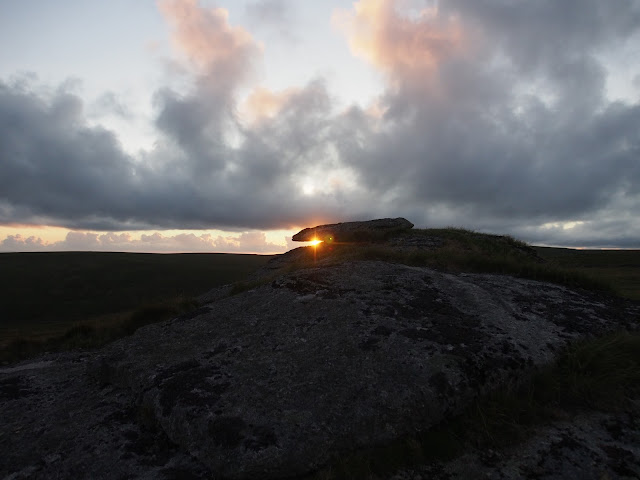 I set up the tent on a rocky outcrop which turned out to be Lydford Tor, so called because the ancient track that runs alongside it was used by 13th century residents of local farmsteads as a route by which to carry their dead across the moor for burial at Lydford church. Luckily I had no such processions pass by me during the night as far as I'm aware and I woke up at 5am to a positively freezing, misty and completely silent moorland landscape.

Amazingly there was an owl hunting in the distant gloom. It was too dark to make out any detail, but the size and flight pattern perfectly matched an Asio species. Short-eared Owls are strictly winter visitors in the south-west so one hunting over Dartmoor in the middle of summer would be unheard of. Long-eared Owl on the other hand does breed on the Moor in very small numbers, although it is strictly nocturnal and rarely seen. 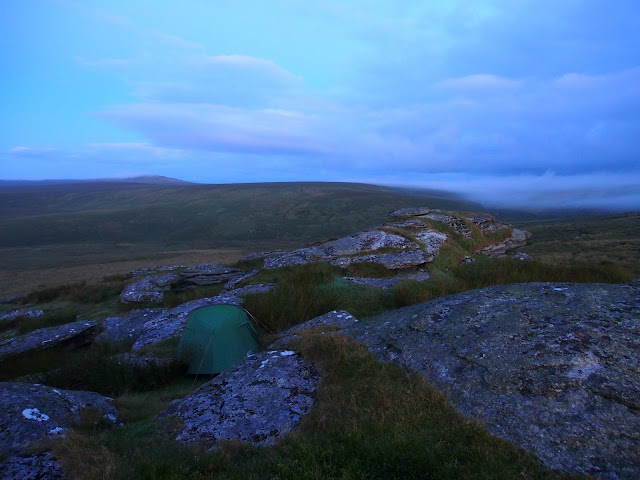 Without decent views or a photo, the owl sighting will have to remain a mystery. An apt way to end an eerie, magical and atmospheric night on Dartmoor. 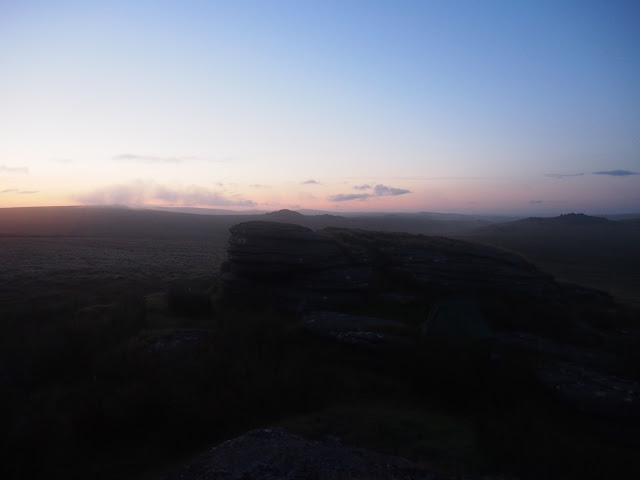