I feel privileged to be able to call this beautiful, unassuming island my home for the next few months... 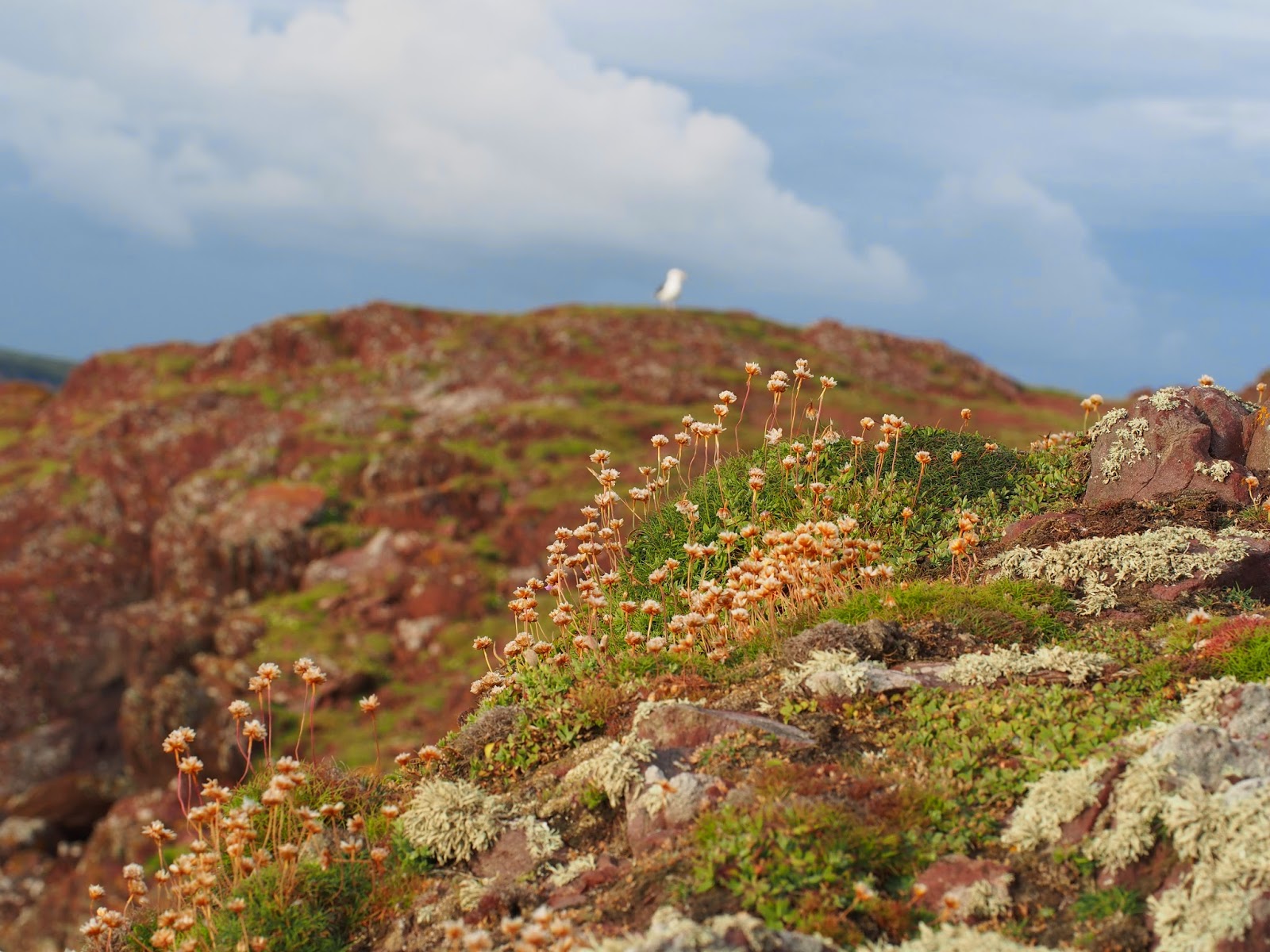 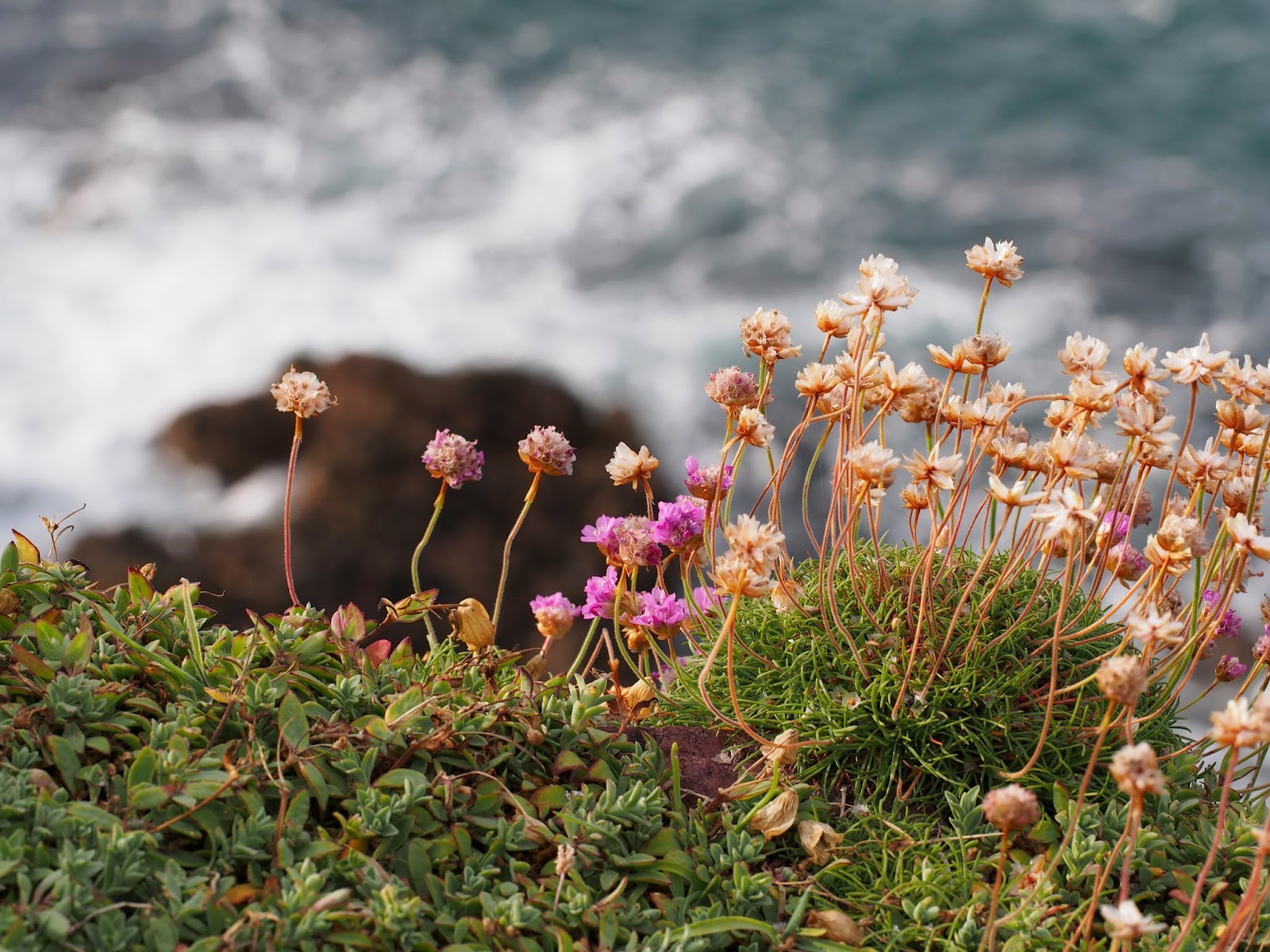 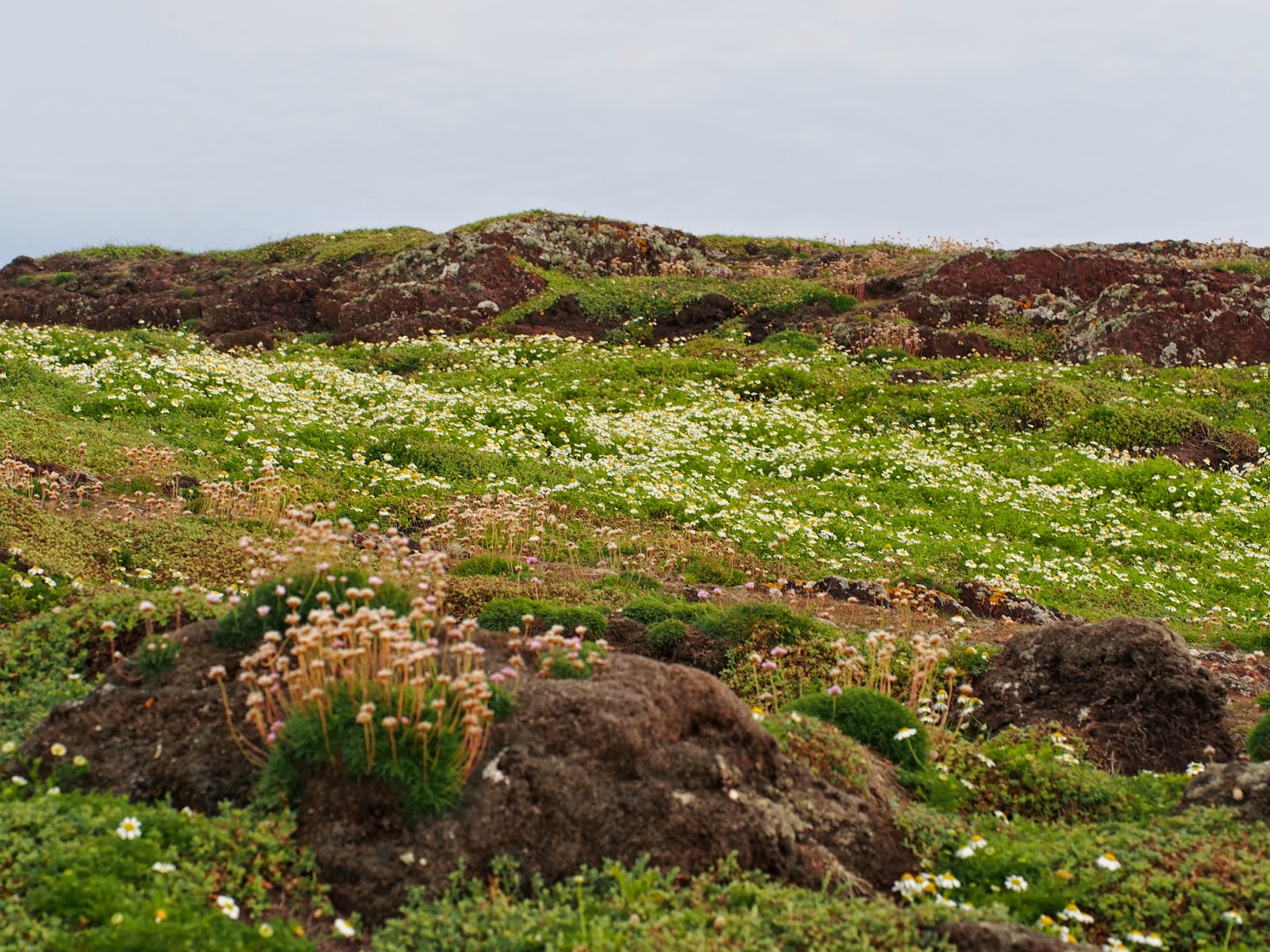 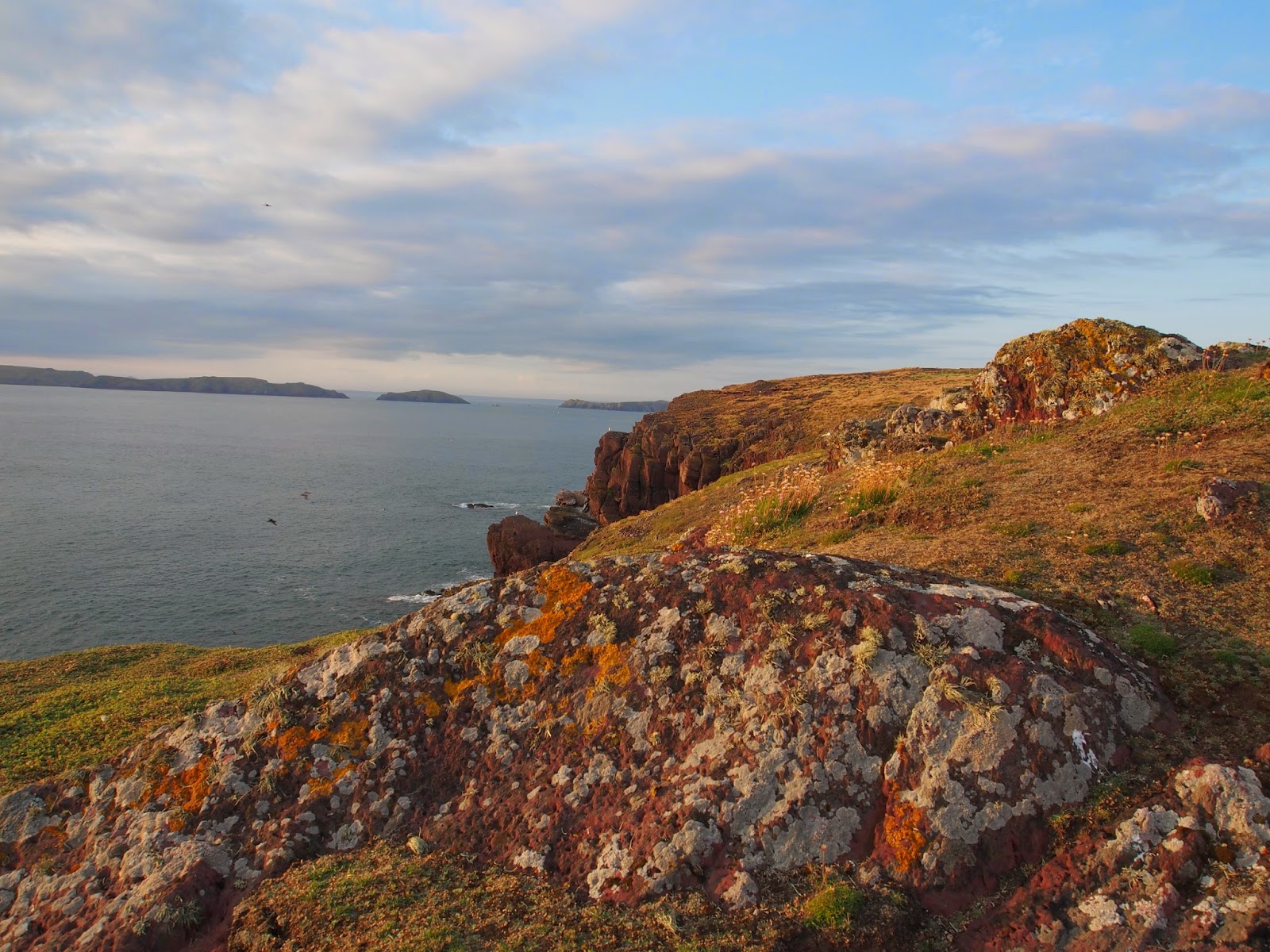 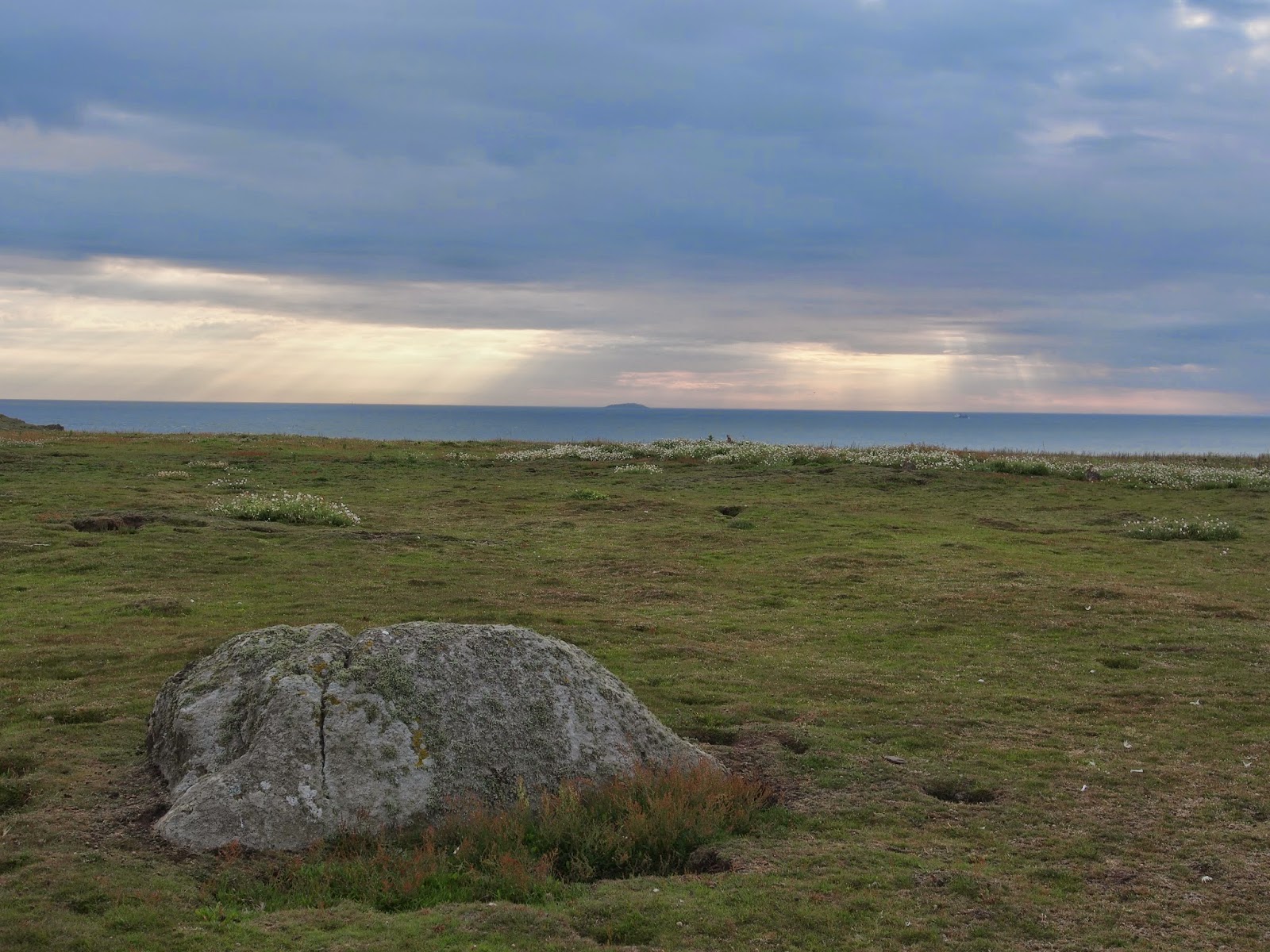 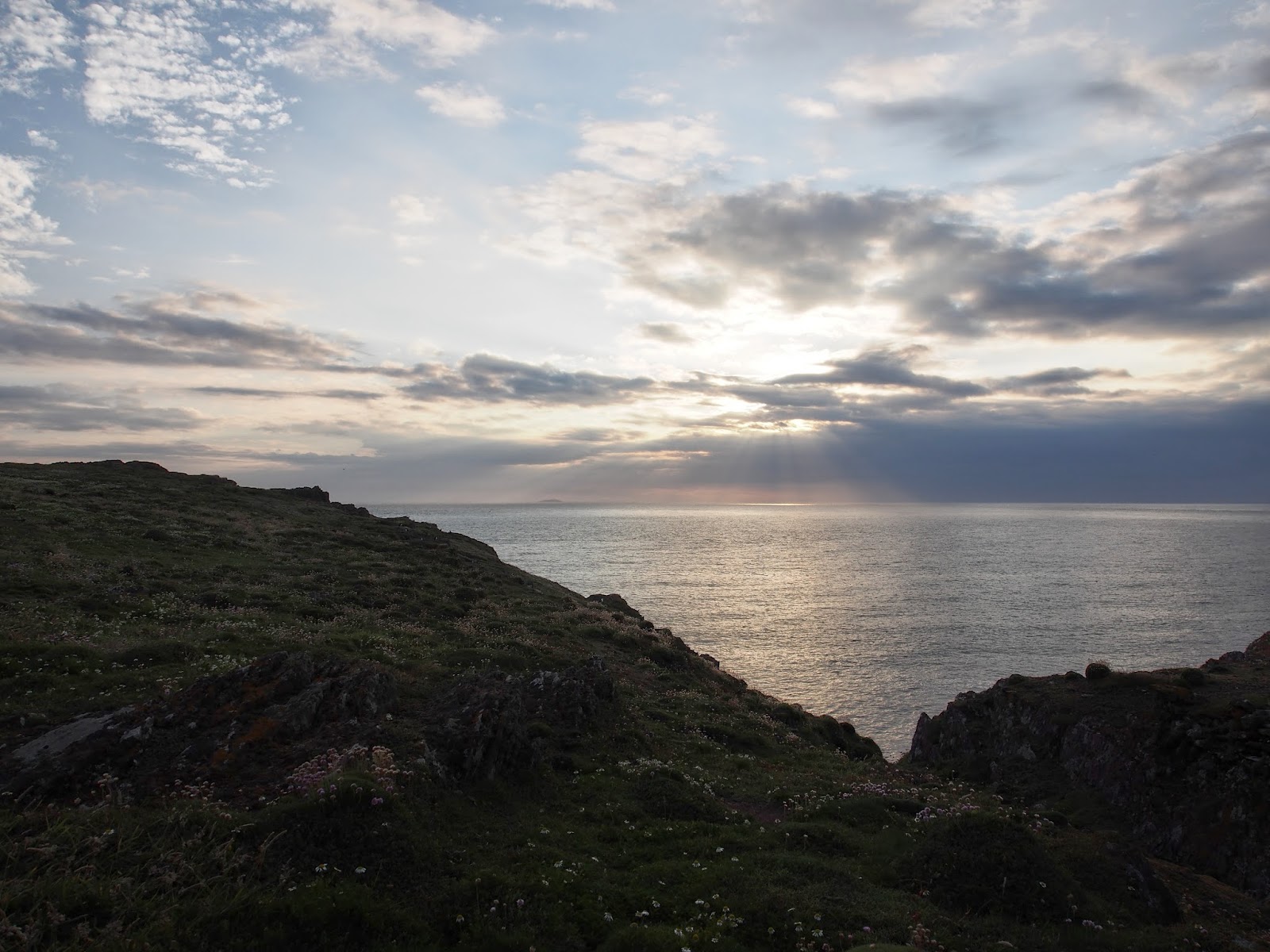 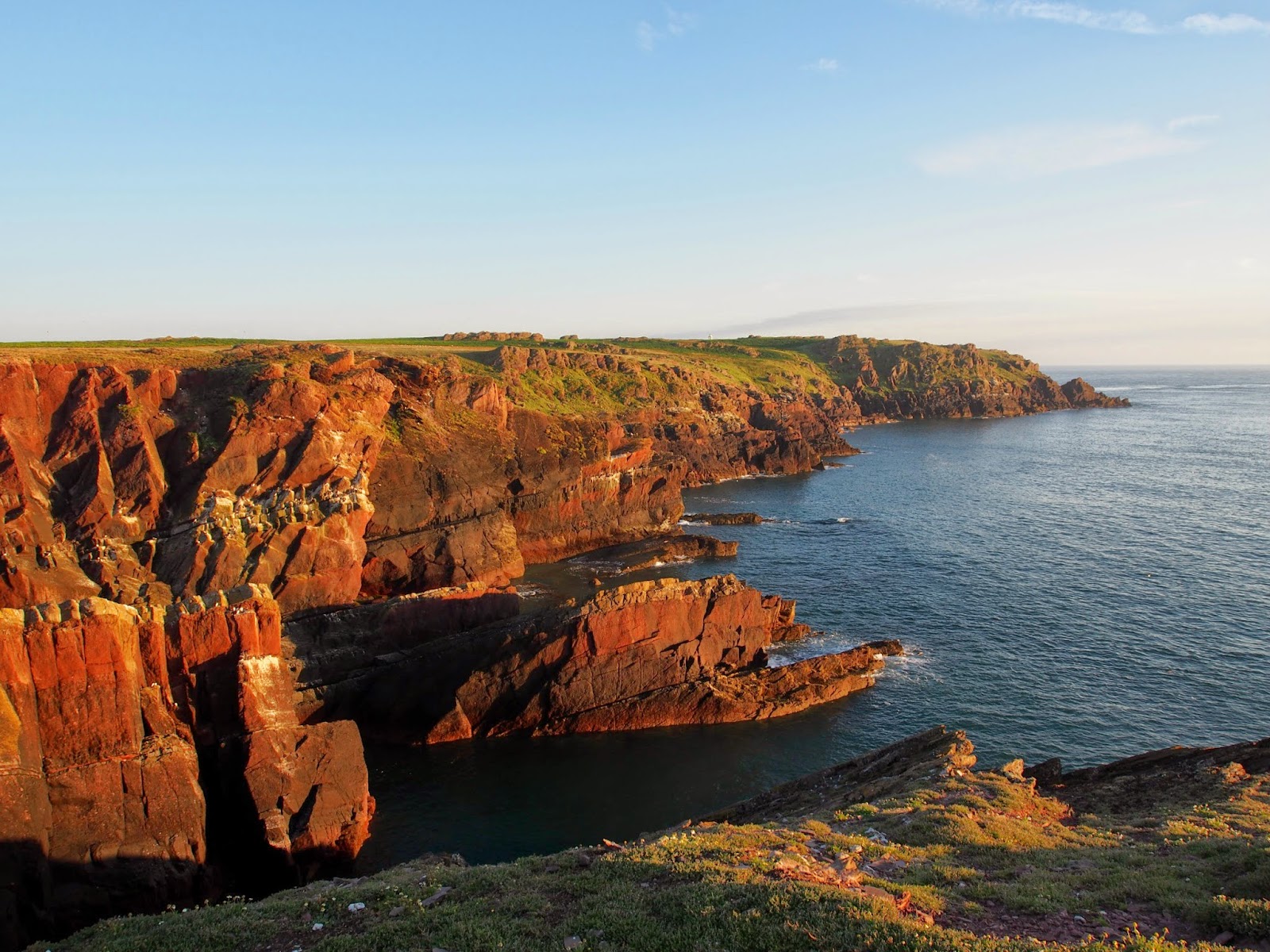 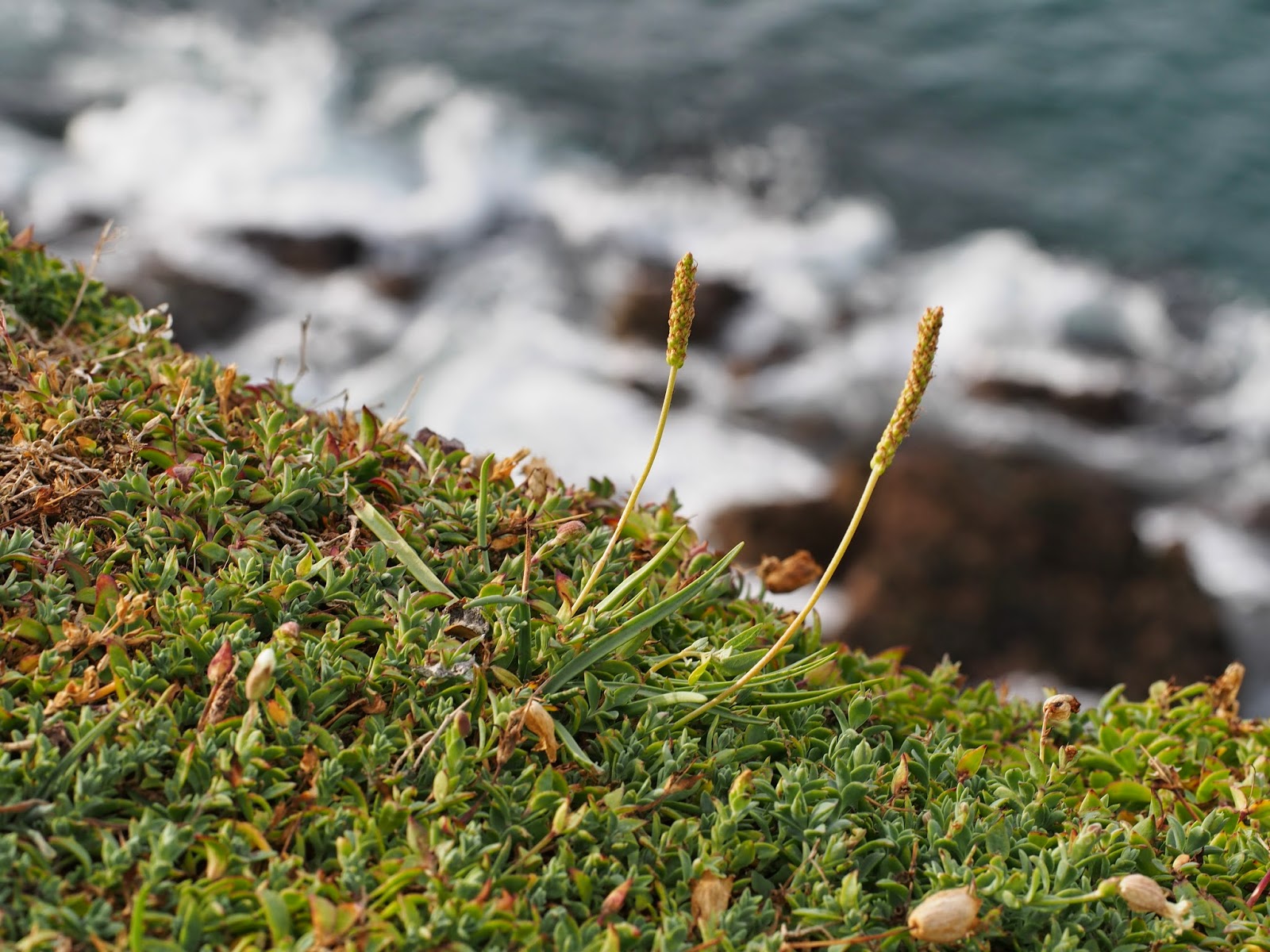 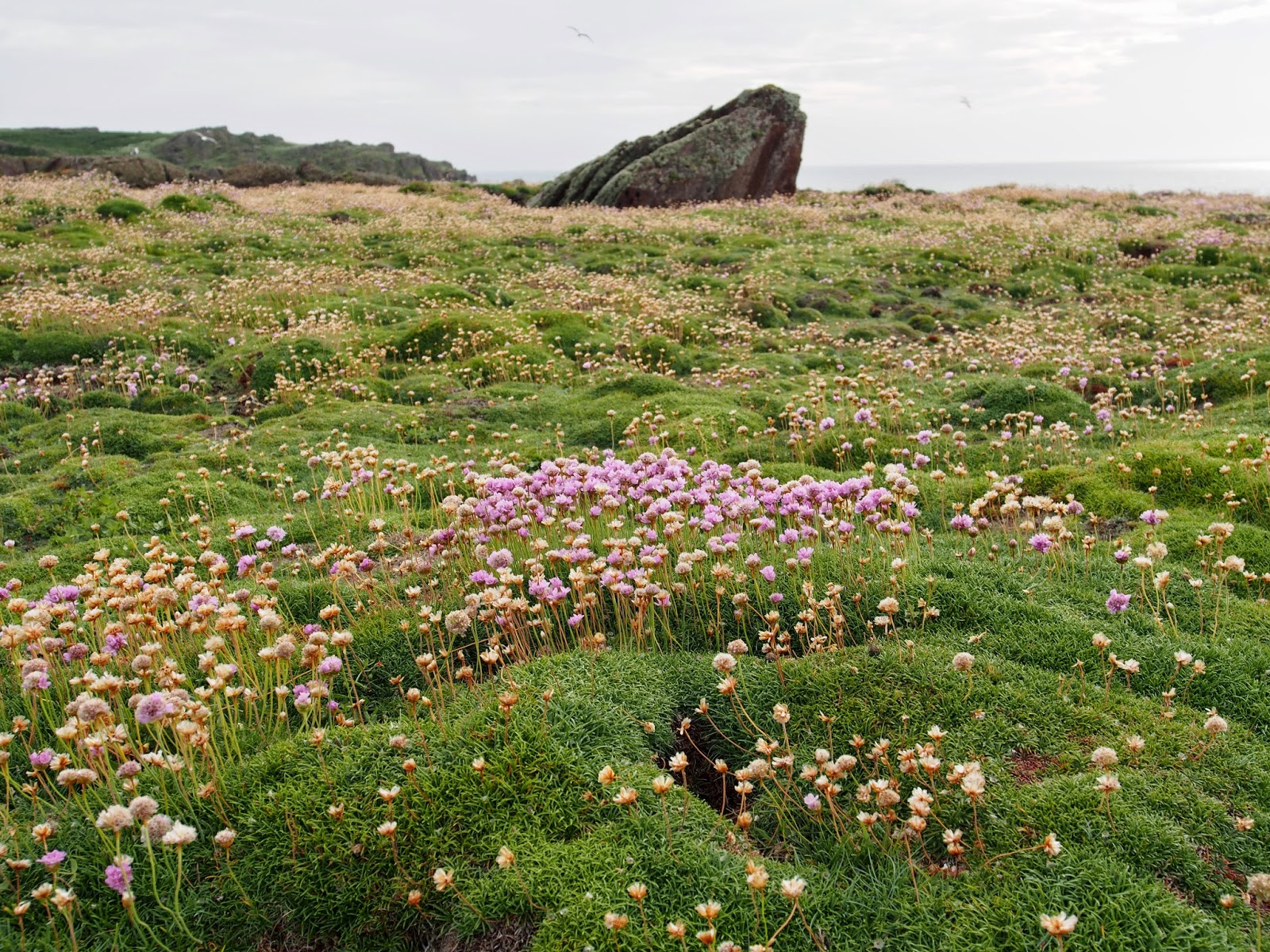 Much of my day on Skokholm is spent monitoring seabird colonies, with a particular emphasis at the moment spent studying breeding success in Fulmars and providing assistance with the ongoing Storm-petrel tape playback sessions around the island in an effort to understand more about the island's breeding population of Stormies.

When the time allows, I've been keeping a butterfly net close at hand in an effort to catch, identify and ultimately increase the coverage of the island's (rather poorly known) micro moths. There have already been some quality finds including a sprinkling of new island records. My walk around the Fulmar study plot takes in some fantastic sheer cliffs, with lush colonies of Sea Campion and Thrift and the specialist moths that depend on them. Thrift Clearwing took a while to find, but eventually showed beautifully on a recent sunny morning, and Caryocolum vicinella was a nice find in one of the cliff-top hides...

When the weather, time and fuel allows, I'm hoping to whip out the big Mercury Vapour trap for some hardcore island moth-trapping. Watch this space...
1 comment:
Email ThisBlogThis!Share to TwitterShare to FacebookShare to Pinterest

Another calm & sunny, if slightly busy morning yesterday on Skokholm saw the departure of the Cardiff field group and their many bags of luggage back to mainland Pembrokeshire. Whilst it was sad to say goodbye to a great bunch of folk and the fantastic Storm-petrel monitoring equipment they had bought with them, it was also nice to welcome a new set of faces ready to enjoy the island. One of the great things I've found about island life is the variety of different characters you get to meet as the weeks go by, each travelling for a different reason and each with their own interests to share.

This week we've been joined by John Jones, a 'lichenologist' who's been studying the species of Skokholm for the past 20 years; running various island field courses throughout his time. You can't walk the cliffs without appreciating the array of low-growing plants, lichens and mosses all tucked away in various crevices, so it was fascinating to be able to learn a little more about them in the presence of an expert. Upon arrival, he wasted no time in pointing out the beautiful Golden Hair Lichen (Teloschistes flavicans) and Roccella fuciformis on a nearby stone wall- two of the rarest lichens in Britain just metres away from our rooms! 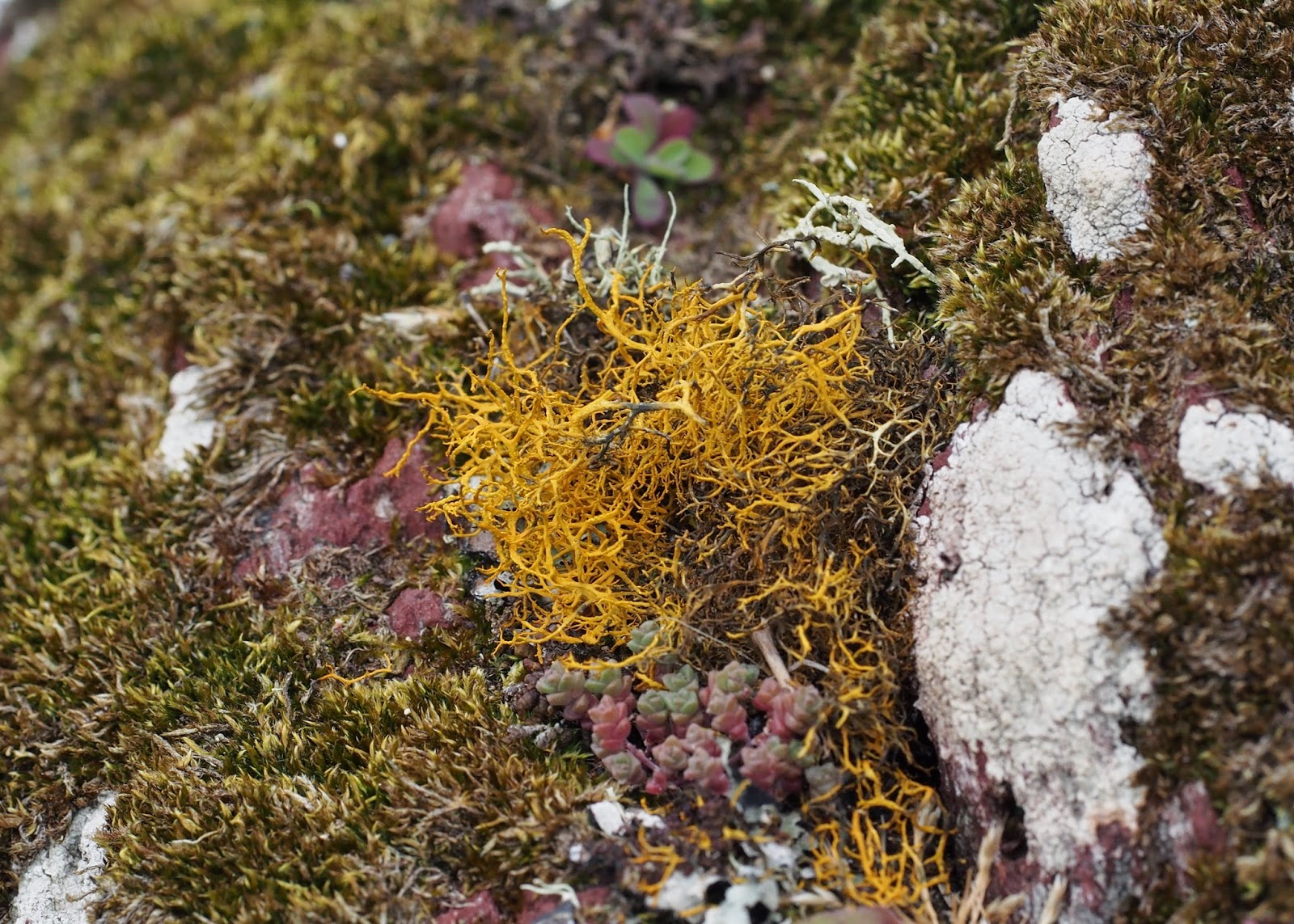 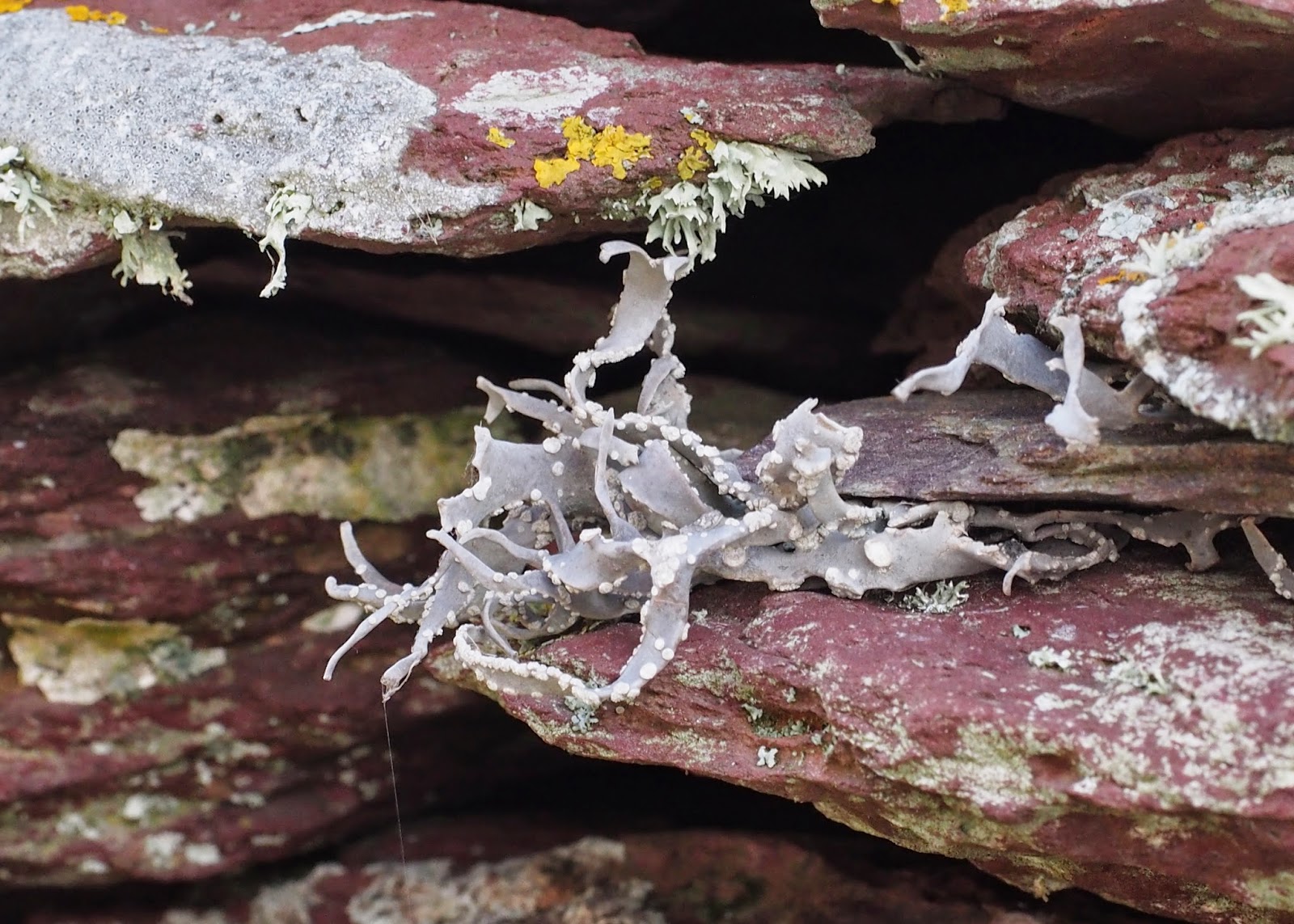 You really do learn something new everyday in this place.
No comments:
Email ThisBlogThis!Share to TwitterShare to FacebookShare to Pinterest

I've been on Skokholm for a week now and can safely say the island is more fantastic than I ever imagined. Dean (fellow long-term volunteer) and myself arrived here back on Monday, just in time to greet a great bunch of students from Cardiff University carrying out their field study projects on the island. We've been guided straight into island seabird monitoring by wardens Richard & Giselle, with Razorbill and Lesser Black-backed Gull chick ringing in the past few days, as well as an ongoing Puffin burrow occupation study and a Fulmar nest monitoring project that I've become hooked on. The latter involves heading out to the cliffs each morning to note the progress of a study plot of Fulmar nests, allowing some magical views of breeding Guillemots as they fatten their chicks up ready for the 'plunge' off the cliff into the sea below!


The days are busy, with much of the morning spent maintaining all aspects of the farm, but it's worth it just to be able to spend the rest of the day birding the island and appreciating every aspect of the island's beauty. The number of Manx Shearwaters nesting on the island is mind-boggling, and I've been spending the past couple of nights outside in pitch darkness, listening to their haunting calls echoing out of their underground burrows. There was even time to twitch a cheeky Black Redstart found in the garden whilst I was eating breakfast a couple of days ago.


Moths are about, and in remarkably high numbers. I've dedicated myself to the fairly arduous task of collaborating all previous moth records from the island into a more user-friendly annotated checklist, which should keep me busy on a rainy day. It's still early days, but there have already been some interesting finds. The Star-wort and Caryocolum vicinella are both coastal specialities which are notable to Skokholm; the latter is one of at least three species which I've identified as new to the island. Hopefully there will be more to come!

The island vibes are great, and if it carries on at this rate the next three months look set to be absolutely mental! You can keep up to date with our daily goings on through the Skokholm blog itself. Well worth a read.
No comments:
Email ThisBlogThis!Share to TwitterShare to FacebookShare to Pinterest
Newer Posts Older Posts Home
Subscribe to: Posts (Atom)