The weird singing maverick Willow Warbler was still present at Stokes Field when I visited this afternoon to check up on the local population of Commophila aeneana. Despite being seriously hard to find in the long grass, the moths appear to be doing well and as usual were looking absolutely stunning in the sunshine.

However, the moth found itself overshadowed when something even more fantastic flew past - a Brown Argus! Despite being fairly common in suitable calcareous grassland habitats, this represents only the second record for Stokes Field after one back in 2012. With an array of suitable foodplants around and about to breed on, here's hoping this little gem becomes a more regular sight on the patch. 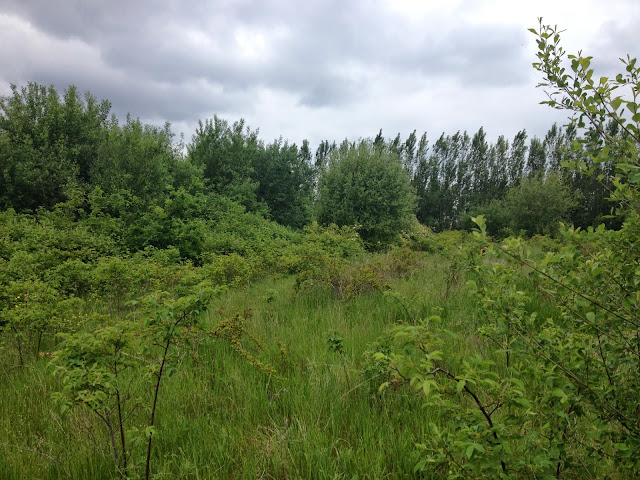 Back out on the patch to see how things are getting on. Bird wise, a Willow Warbler and several Whitethroats appeared to be holding territory, and it's always nice to catch up with the local Bullfinch. Due to its small size and neglected state, Stokes Field can be a little off and on when it comes to spring bird passage - and probably more off than on - but it will take some doing to beat April 2013 when Tree Pipit, Redstart and Red Kite were logged during the duration of the month.

Today's Willow Warbler was interesting in that it was regularly incorporating Chiffchaff notes into its song; albeit at a more erratic and sped up pace than the latter species. A quick Google search found this interesting article on song 'mixing' in Phylloscopus warblers.

Out in the grassland, the stunning Commophila aeneana was flying in the same field as last year in spite of initial worries that trampling by dog walkers over the winter period may have had a detrimental effect on the population. Despite the abundance of the foodplant (Common Ragwort), the moth is very scarcely distributed throughout the county, and currently only known from around ten sites. There were plenty of other insects about to keep me occupied for a good three hours, and it will be interesting to see what else appears there in the next few weeks before I head off to work on a farm on the Isle of Mull for the summer - major bombshell dropped.


3 comments:
Email ThisBlogThis!Share to TwitterShare to FacebookShare to Pinterest

Hawk moths of any kind are a rare occurrence in the garden so for two species to arrive last night definitely called for a celebratory blog post! Poplar Hawk-moth is one I've wanted to see for years, so to finally have it turn up in the garden was a pretty special moment.

Hawks are particularly brilliant as they provide an attractive outlet through which to share the magic of moths with family and friends who don't otherwise share quite the same obsessive keen interest as I do. It makes you wonder how much stigma would still surround this group of 'brown clothes-eating' insects if we weren't blessed with such fantastic crowd pleasers such as hawk-moths... 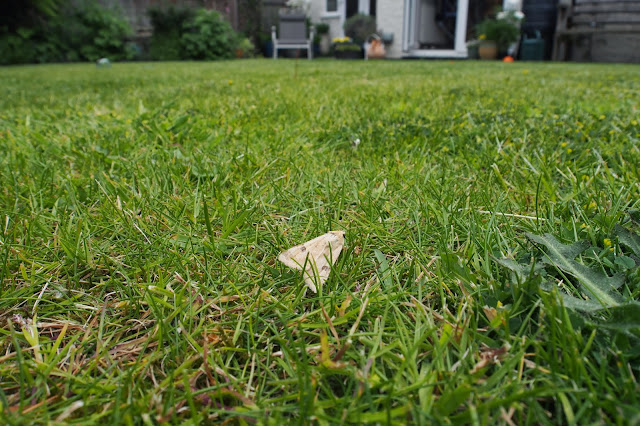 Moth survey in the Malverns 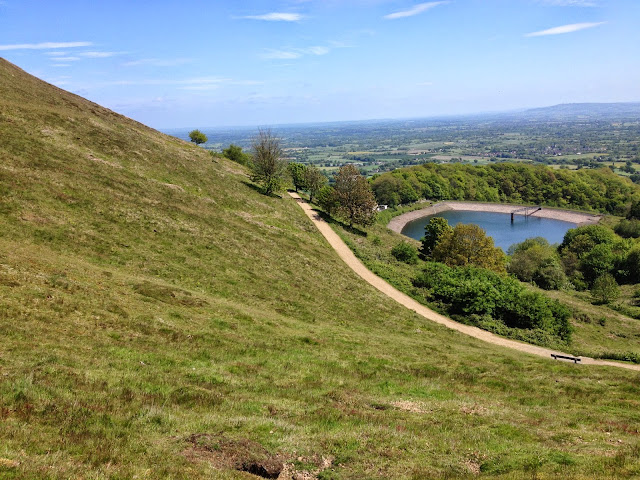 I joined Tony Simpson and Jenny Palmer back on Thursday for a moth survey in the Malvern Hills. Jenny has the enviable job of conservation officer within the hills, so the records we collected of any notable species during the survey would go towards influencing future management across the Malvern reserves. We were particularly eager to reaffirm the presence of Pyrausta cingulata, a colourful chalk grassland species with a very restricted distribution in the Midlands.

Despite a hefty search across the steep slopes we didn't manage to find our target species - although it may have been slightly too early in the season. However, it's hard to complain with the scenery so stunning and especially when the most abundant moth was Thisanotia chrysonuchella - a subtly patterned little scarcity which has always managed to evade me further down south. 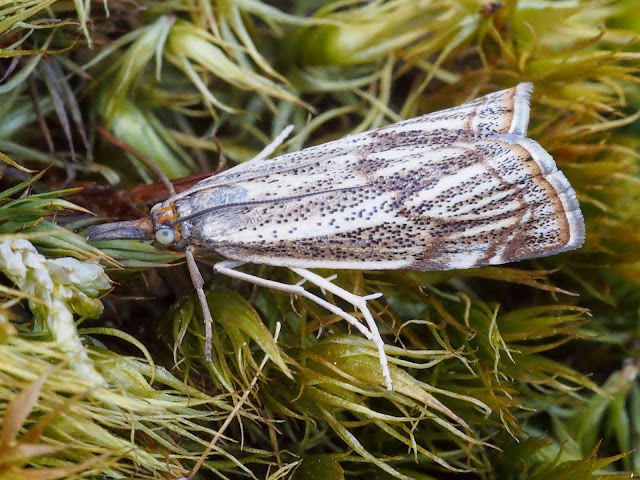 A generous supporting cast of invertebrates and birds including a pristine Speckled Yellow, several Tree Pipits, a Cuckoo and Red Kite rounded off a great day in the Malvern Hills - my last chance to get over there for a while as I headed back home for the summer this afternoon.

And the award for the most pointless mowing goes to...

It seems like the pretty flowers and wildlife in the alleyway the other day were all a little too overwhelming for one local resident, and this was the view that greeted me when I walked out there this morning. Someone had decided to cut down a 10 metre stretch of lush flowering grasses and plantain for no reason... 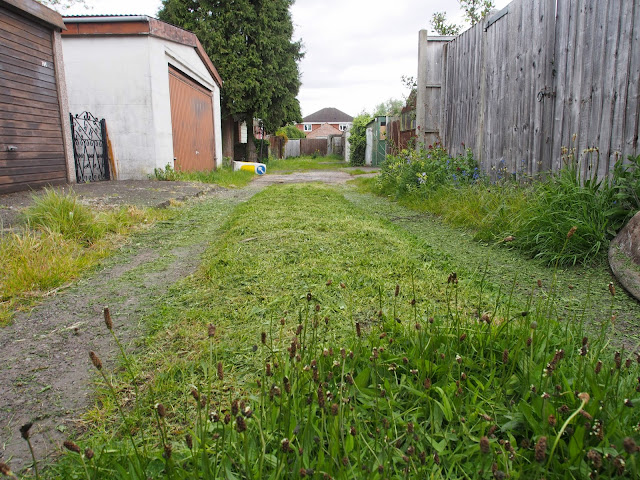 Alas, there have been greater atrocities inflicted on nature by humans, but on a local scale there is nothing to gain from cutting down the middle part of this rarely used, overgrown track. The tallest stalks of plantain were no higher than 3 inches, so it wouldn't exactly present an obstacle to passing cars, and it doesn't exactly form part of anyone's garden.

'Tidiness' is a man-made concept - why do we feel the need to constantly inflict it on the natural world?

The past couple of weeks have seen the alleyway behind our student house transform into an invertebrate haven, with a healthy range of common plants (Green Alkanet, Herb Robert, Red Campion, Deadly Nightshade & Ribwort Plantain to name a few) sprouting up on the disturbed ground. Add to that a couple of garden escapes (Greater Celandine and Honesty) and the alley has become an attractive location for visiting pollinators...


2 comments:
Email ThisBlogThis!Share to TwitterShare to FacebookShare to Pinterest

We handed in our last assignment of the semester yesterday, marking the end of second year. Given the huge workload we've had to endure in the past few weeks, it was inevitable that cleaning chores in our student house would take a back foot...

... nah, joking. We're not that bad - this wicked creature has actually been thriving amongst mud and asbestos in our outdoor garage for the past couple of weeks. Insane!


A real spring gem that is fairly easy to find during the day around birch trees, I found this nice example of Incurvaria pectinea resting amongst bluebells in Shrawley Wood during a recent uni field trip. It's situations like this when I find it always helps to carry a spare specimen pot or two in my rucksack, even when I'm not in moth mode!

For anyone wishing to gen up on their Incurvaria identification, I made this brief comparison based on moths caught on my local patch last spring...