Below are some of my personal favourite shots from this past year. All have been taken with my Sigma 70-300mm which, for most of the year, has been jammed on 200mm and struggling to auto-focus!

By the end of January, I had already snapped up a local rarity in the form of a beautiful Long Eared Owl; which took no notice of me or my companion, David Campbell (see his blog here) and allowed some excellent photography opportunities...

In February, we had the famous extreme snowfall event which allowed me to get this Green Woodpecker shot as it dug around in the snow in Richmond Park...

A trip to Hayling Island in late Winter with the RSPB would prove to be a brilliant day out, with a very scarce Glaucous Gull being the reward. It was very cautious of us as it fed, constantly looking up at us, but I was provided with a rare photography opportunity...

I took one of my favourite shots of a Teal at the London Wetlands Centre. The bird had just appeared out of the undergrowth in the Sheltered Lagoon, and the crystal clear water and conditions allowed for a nice reflection...

In the middle of spring, I heard news of a very rare White throated Sparrow on my favourite nature reserve, Old Winchester Hill. It showed brilliantly for me and a few others, before dipping down into the bushes and only very rarely reappearing for the rest of it's stay...

Ideal weather conditions allowed me to take this shot of a Grey Heron in Bushy Park. Its outline was highlighted by the evening winter sun and the light breeze made the bird's plumage sway in the wind...

I don't think 2009 has been anything special, and I haven't managed to get out and about as much as I would have hoped due to GCSE mocks, however, I have been particularly pleased with a few shots I have taken this year, especially the ones above.

The situation will probably be the same in 2010, with the real GCSEs looming over, and until the start of summer, where I will have a big gap before College to do as much photography as I like, the blog will probably be quite quiet.

New Year's resolutions? I never really know what to put... but I guess that when I have the time, I should aim to get down to my local patch more (Bushy Park) and try for the common species that I haven't yet caught on camera like Coal Tit, Siskin and a Tawny Owl. Maybe I should start a patch list again to keep me motivated.

5 comments:
Email ThisBlogThis!Share to TwitterShare to FacebookShare to Pinterest

On the 27th we went to Suffolk to visit relatives for a few days. The garden alone has great birding, from Lesser spotted Woodpecker and Nuthatch, to Red legged Partridge and Woodcock. Amongst the usual Pheasants and Partridges however, lurk mutants... Duh dah duh!

... Melanistic Common Pheasant. Even though they may look like a totally different species, these guys are still technically Common Pheasant, just a bit mucked up. The bird below is a male, note the remains of a white collar and red eye patch. They are still just as timid as normal Pheasants, so getting a shot wasn't easy and by the time I took my eye out of the viewfinder after taking this shot... it was gone.

A relaxing, chilled Christmas day was spent at home this year instead of the usual Christmas morning spent travelling up the M11 to Suffolk, or the A3 to Hampshire, and to start off the festive season, a Woodcock flew through the garden early on Christmas morning... a first record and very fine bird for an urban setting in Esher.

On a very crisp cold Boxing day, we took a stroll in Bushy Park, where part of the canal had flooded and created a mini-wetlands area, which seemed to have avoided freezing over. There was nothing much about apart from a few gulls and a heron, which fed in the morning light...

Below are a few Robin shots I took earlier today in Kew Gardens. This individual had decided that it was way too cold outside so made it's way into the warm and moist Temperate house, what a wimp...

Meanwhile, outside in the surrounding shrubs, this Robin was freezing his arse off as he fended off rivals and claimed his rightful territory... I think you can agree with me when I say temperate Robin has the right idea!

Have an excellent Christmas and a Happy New Year from me, and keep feeding and watching wildlife during this flippin' freezing weather that we seem to be getting. A White Christmas...? You never know!
2 comments:
Email ThisBlogThis!Share to TwitterShare to FacebookShare to Pinterest

A nice sunset from last night, as the last of the sun's rays highlighted the whispy, soft clouds high in the sky... I could be a narrator for one of those M&S food adverts couldn't I! 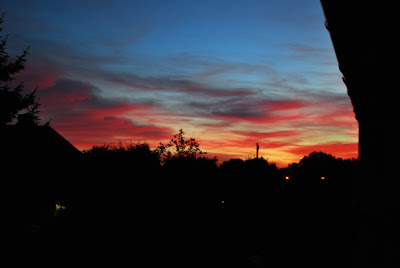 Why the small shots again you ask... well, I think I might go back to more 'sensible' sized shots for the New Year, which you can just click on to see a larger version instead of taking you all the way to my Flickr... which gets annoying. So this is just a tester to see whether it works.
1 comment:
Email ThisBlogThis!Share to TwitterShare to FacebookShare to Pinterest

Still waiting for my first Redwings of the winter to land in the garden. There's a good crop of berries waiting for them and a few have been flying over the garden so it can only be a matter of time before I can get some shots of them. In the meantime at least a fat, young Woodpigeon is enjoying the berries...

It's been a while since I last posted, and even longer since I last took a trip to Bushy Park. I can't believe I'm saying this but the sun was out and it wasn't actually that cold when I decided to take a short trip on Sunday.
I've missed the Red Deer rut for this year, although occasionally the males do have a few fights in December and into January. There were large gathering of females at some of the large mud puddles resulting from recent rain... and I swear I actually saw two females stand on two legs and box each other like kangaroo do! There were also a few males about but no action...

I was very pleased to find a wintering Chiffchaff in amongst the bracken along the canal. It was very tame and at times I thought it might have actually been a rarer winter warbler... but then I realised that I was in the middle of London in Bushy Park, not on a remote island in Orkney!

Mallards were abundant along the main lake as where Black-headed Gulls...

What a grumpy old sod...

I'm sure there will be plenty more seagull antics as the numbers increase in the park, but for now.... happy wildlife watching!

Below are two moths I've found in and around my garden in the last week. These two, like many others, can be found in the coldest months of the year. It makes you wonder how these hardcore animals manage to survive in the freezing temperatures and horrible weather that makes up an unbeatable British forecast!

Male Feathered Thorn... found back on the 10th.

A Rush Veneer, a migrant species that can be found at any time of year... found on my local hill, Stoke's Field last week.

A few weeks ago now I twitched a very rare bird called a Brown Shrike in Staines, just down the road...

You can probably get better shots than this out of a 5 month old baby. I can't give the excuse that my hands were shaking because they weren't. In fact the bird was so unexciting I found myself leaving a few minutes after arriving, looking forward to going home and getting started with some EXTRA FUN Music coursework!!

A post on Skippers...? Bit random I know but whilst I upload Brown Shrike photos (yes, you heard correctly, BROWN SKRIKE PHOTOS!!!!!!!). Here are some shots I've taken this year on skippers, skippers and more skippers. Plus two rare skippers at the end!

A Lulworth Skipper, taken on a Dorset headland. It's last stronghold in the UK...

And the two gems of the butterfly world, Dingy and Grizzled Skipper... both in serious decline and very rare.

I don't know 'bout you but I'm all skippered out... think I'm gonna' go and sit down in front of the X-Factor in a minute and swear at those two Irish twins... nah you guys are cool, just a tiny bit out of time!

Some Recent Moths...
As you can see the blog has been full of recent posts... not, so here is a quick update on my recent moth trapping activity in the garden.
I was very pleased to see this Cypress Carpet drop into the garden a couple of weeks ago. A very recent addition to the British list, we can thank our non-native plants for bringing this species to Britain and allowing the species' caterpillar edible footplants...

The very attractive Light Emerald Campaea margaritata and my finger...

Below is one of my favourite moths, the Centre-barred Sallow Atethmia centrago, never thought I'd find one in my small Surrey garden!

Last but not least, the very wierd and well named Snout Moth Hypena proboscidalis... note the snout like thingy on its head!

Right, thats it for now. It shouldn't be too long before I post again and I've currently got a few posts on the go at the moment (that will obviously get disrupted by coursework!!), so stick around.
Have a good weekend,

Landscapes from the Archive

Just been watching Darren Brown as he tried to control the nation. I didn't get stuck to my seat so decided to post these shots. I took them from a holiday in Wales several years ago of the view out of the B+B. Beautiful isn't it?

Anyone glued to their T.V. screen?

We've all killed them when they've landed on our beer glass or attacked our sandwiches, but the other evening I witnessed wasp behaviour that should be treasured, . A group of 5 or 6 wasps were peacefully drinking with other, out of the garden bird bath. These normally aggressive insects would take it in turns to land on the rim of the bath and take tiny wasp sips before departing to a nearby leaf to dry themselves in the evening sun, I grabbed the macro lens and started shooting. It was actually quite cute to watch and you would never guess that the next day these black and yellow beasts will be carrying out their next attack on the human kind!