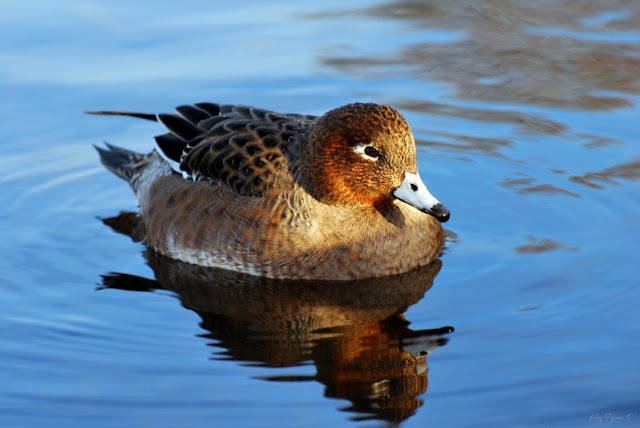 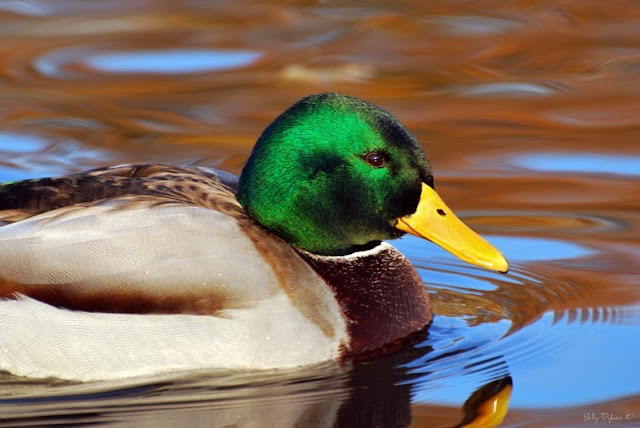 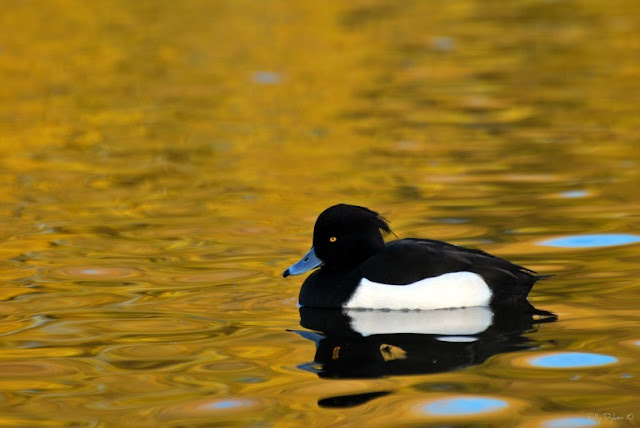 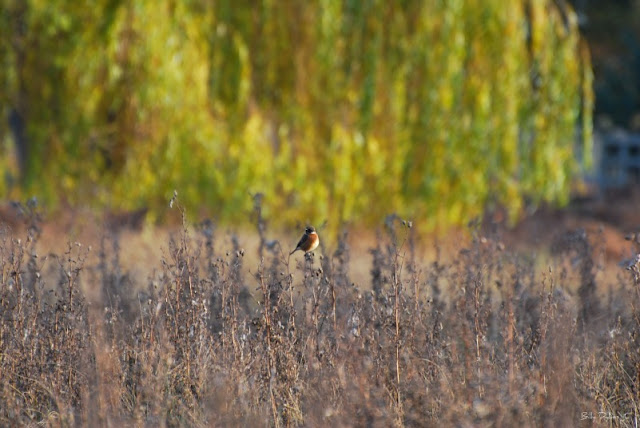 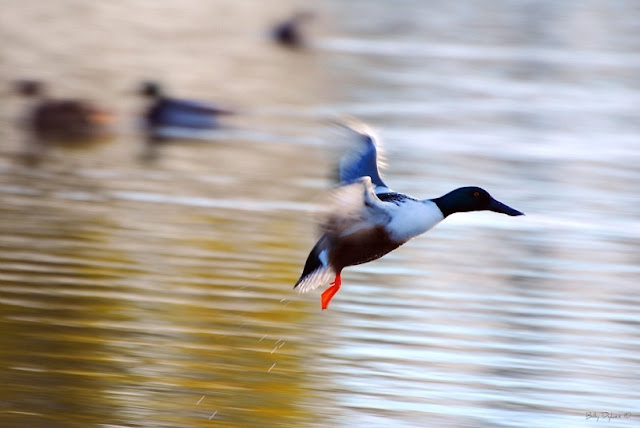 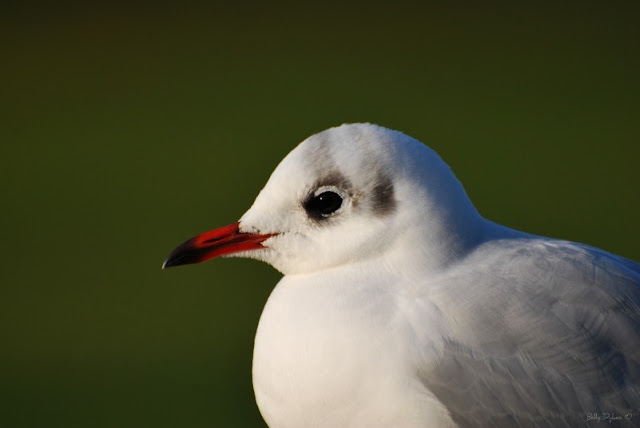 I've just re-filled the bird feeders ready for the winter, so might try and dig out that brown sheet thing that acts like a hide and watch as the birds flee the garden and bugger off somewhere else. One thing that doesn't seem to want to bugger off at the moment is that damn Grey Squirrel.
I must say I quite liked the local Squirrels, and their daily antics during the summer. They weren't doing any visible harm and I'd happily wave at one as it passed gracefully through the trees. However, since putting feed out again, I've realised just how bloody annoying they are- casually hanging from a branch whilst stealing sunflower seeds like the little rat is genuinely trying to mock me- and now the sight of a squirrel as I open the blinds in the morning will put me in a bad mood for the rest of the day.
... "Think fluffy bunnies, Bill. Happy, fluffy bunnies."
I think I need to see a squirrel psychiatrist.
3 comments:
Email ThisBlogThis!Share to TwitterShare to FacebookShare to Pinterest

Well, I don't quite know how this happened. One minute this morning I was happily in front of the computer, reading through endless pages of mind numbing, but extremely addictive BirdForum threads, and the next thing I know, I had found myself in the car park at The Tarn lake in Puttenham, where there happened to have been sightings of a Red-necked Grebe... what a coincidence!

Ok... ok, you've caught me, I twitched. Happy now? I twitched a Red-necked Grebe. I'm not proud of it.

With directions on how to view the Grebe kindly given to me from fellow birder Sean Foote, I set off through quiet, misty woodland, with the odd tick from a Robin, or tack from a Wren. 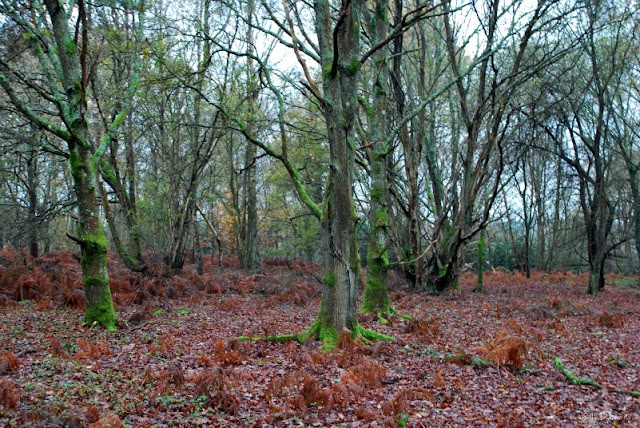 Even before we'd reached the lake, I had bagged myself a lifer in the form of a Giant Green-footed Chicken, which can reach 30 foot high- although I only managed to fit the leg in the frame... 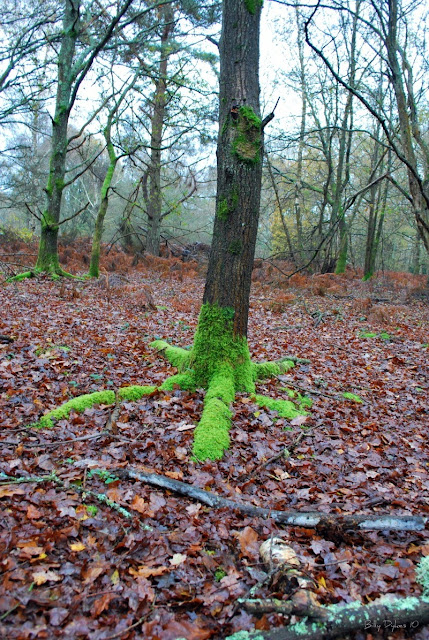 After a left turning, we came into a clearing, where the Tarn could be seen for the first time. It is a beautiful lake, and the last of the autumn leaves were creating a reflection, that, on a sunny morning, would look spectacular. Unfortunatly, it was a cold, misty and grey morning, but no sooner had we had come out onto the bank had we caught out first glimse of the Red-necked Grebe, as it hugged the shoreline... 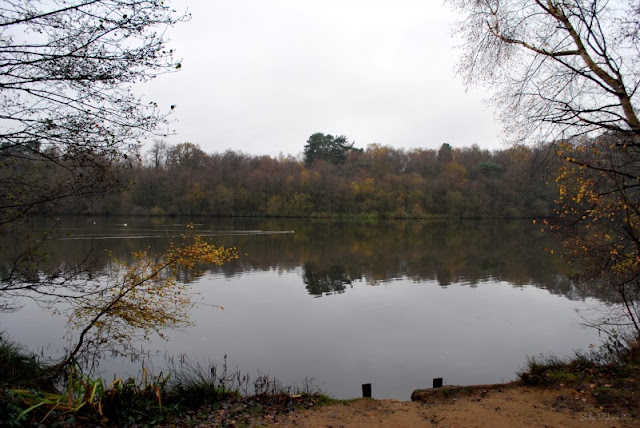 In its pretty drab winter dress, it doesn't really live up to its name... 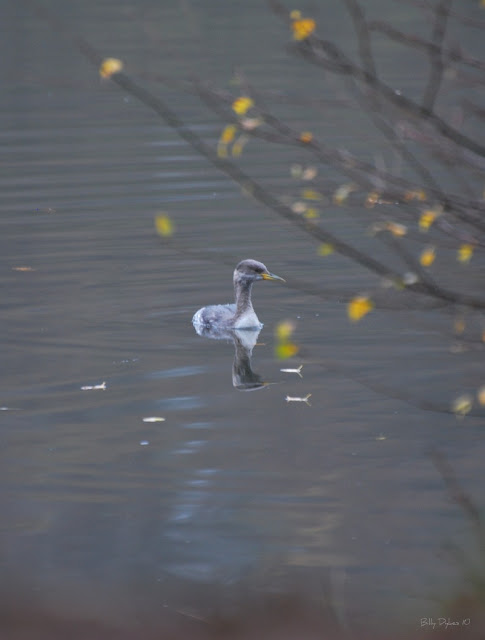 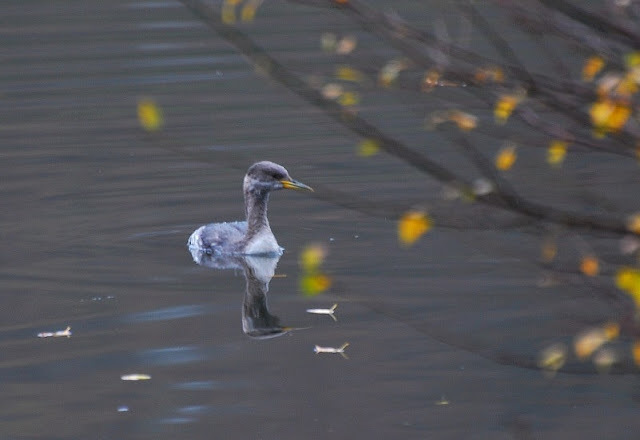 The bird was wary, as I'd expect for a Grebe, and even though there were just two of us watching the bird from the bank, it soon made its way out into the middle of the lake, safe from the camera.

On the other side of the lake at the other car park, a large wall of scopes was lining up. Their loud voices could be heard from miles away, and they didn't stand much chance of getting close to the Grebe- I guess everyone has their own techniques.

After diving, the Grebe scooted off to the far end of the lake. I followed it; waiting mainly until it dived, when a walk would turn into a jog, then a pause as it surfaced, and then a jog again when it dived, until I was just a few metres away from where it had last dived.

It surfaced just a little bit out of range for the frame filler that I was hoping for, but acceptable enough to make it identifiable as a Black-necked... no, Little Grebe? No, its too big. Great crested Grebe? Can't be right... hang on, I'm going to get it right... Red... Red-necked... Red-necked Grebe, thats it! Identifiable by that clearly visible red neck... 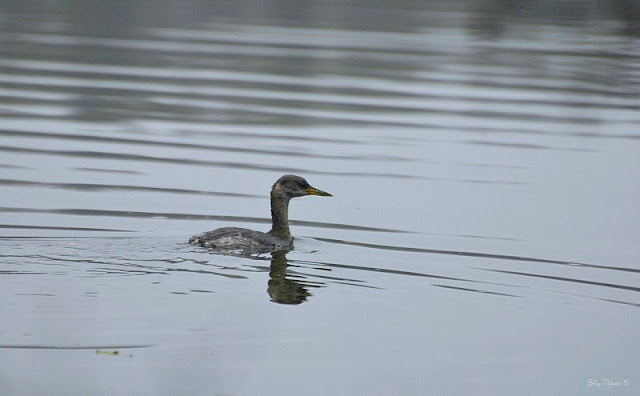 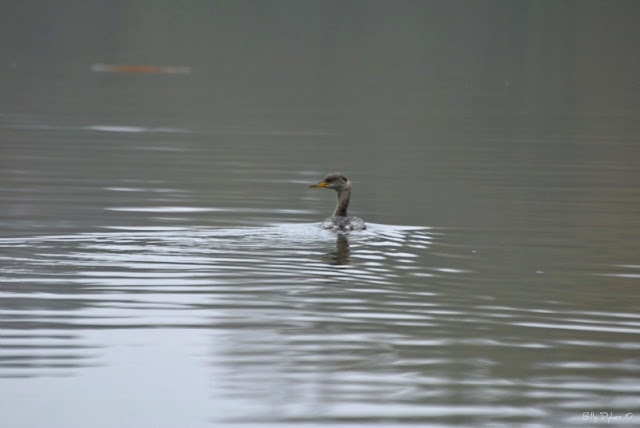 As it moved off into the mist, it was nice to catch up with fellow birder Hillary, whom I'd met at the RSPB Guildford walk to Hayling Oysterbeds. She identified this pretty stereotypical fungi species, which I seem to have forgotten the name of... if anyone could re-identify it for me it would be much appreciated :-) 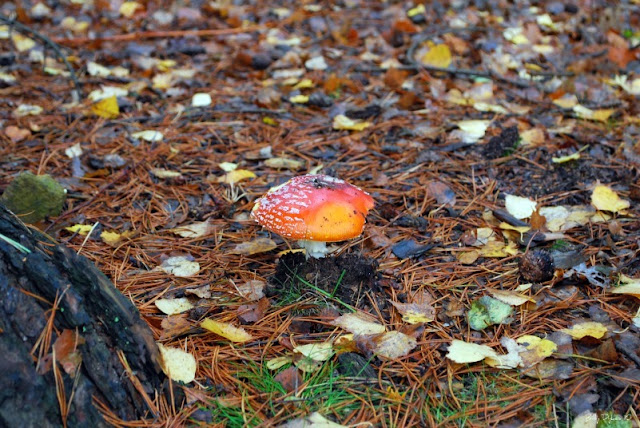 And this coral like Lichen caught my eye on the way back... 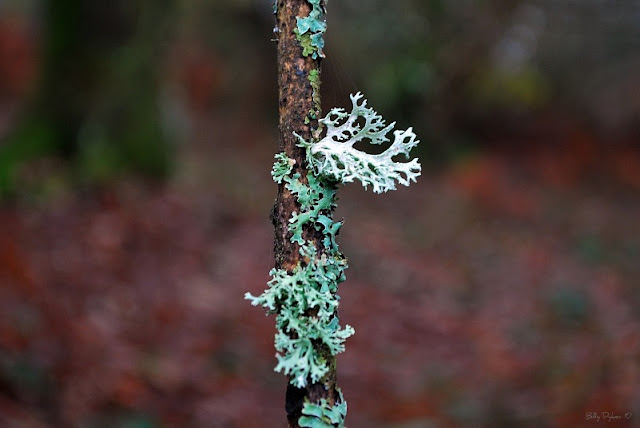 A successful twitch... I mean birding outing. Thanks again Sean for the directions.
Now wouldn't it be such a shame if I were to somehow find myself at Shawley Crescent in Epsom Downs tomorrow, where there happen to be lots of Waxwings eating berries as I write this.
1 comment:
Email ThisBlogThis!Share to TwitterShare to FacebookShare to Pinterest

If anyone is stuck on what to get me for Christmas, here's a little suggestion...

Although it wouldn't look out of place on the top of a tank as a US manufactored Surface-to-air missile, or as an electron powered telescope used to detect black holes and galaxies in the outer-reaches of the Universe, this is actually a Canon 1200mm. It boasts an ultrasonic motor big enough to take a space shuttle to the Moon, but doesn't actually have any optical stabilisation... bit disappointing really. Of course, the exotic babe would be nice as well... 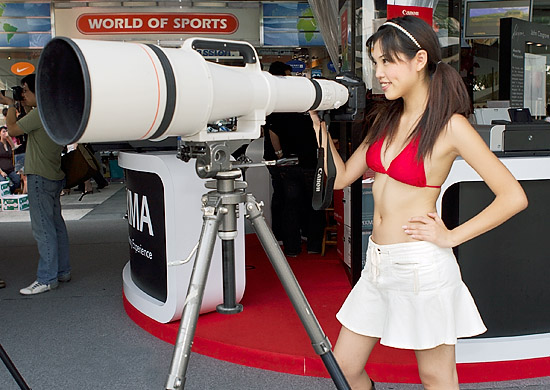 If you can't quite stretch that far, then I guess I would settle for a Canon 800mm, although don't expect me to be in such a good mood on Christmas morning, when I open my present to find I can only get a frame filling shot of a bird from 2 miles away, as opposed to from the other side of the world.
4 comments:
Email ThisBlogThis!Share to TwitterShare to FacebookShare to Pinterest

Autumn is by far the best time to view Jays, as they move from oak tree to oak tree with their distinctive bouncy flight, carrying a crop full of acorns to store for the winter.

Every now and again, one will pass through the garden at this time of year, but never stay for long. They are usually extremely shy and require quite a lot of patience to get close to. However, with a sudden downpour yesterday morning, and with me coincidently relaxing  studying at home; not having any morning lessons at College (ahh the joys!), a Jay decided to sit out a spell of bad weather in an Apple tree in the garden. I was able to fetch the camera and slowly open an upstairs window, and their it was.

A real beauty of a bird (I never thought I would ever see the day when I actually complemented a member of the Crow family!)... 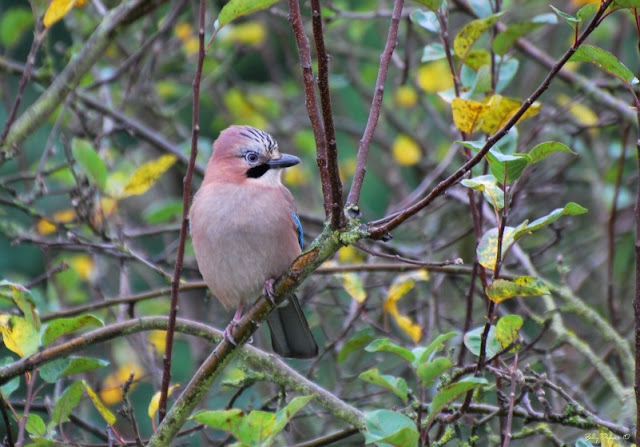 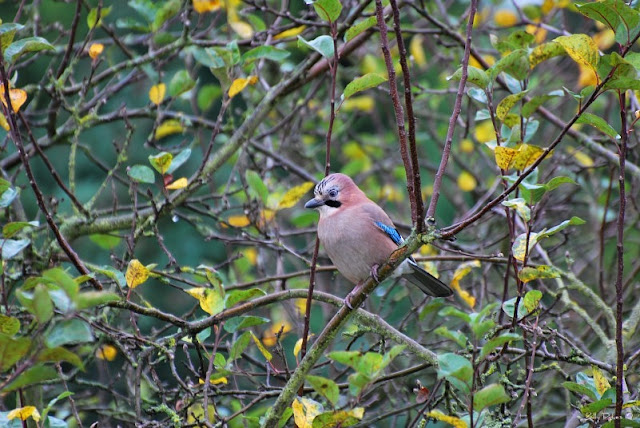 Now leave me alone whilst I wonder how on earth I am supposed to distinguish Intrinsic Proteins from Extrinsic Proteins, whilst at the same time staring at a fresh sheep's heart I've just collected from the butcher's ready to be dissected in College tomorrow (oh the joys of Biology A-Level), and at the same time as all that, crying at why it isn't me holding this stick with Waxwings feeding at the end of it...