Actually, I wouldn't be surprised if even the ducks are getting a bit pee-ed off at all this rain that is falling out of that grey mass of crap above our heads-- although some may like to call them clouds.

However, due to the undeniable fact that I've neglected all local patches that I ever had, I had to get down to Bushy Park. Luckily, there was a weather window; the sun was shining, and birds were singing... only kidding, it was raining and it seemed that, as we got out of the car, the weather deliberately decided to get worse, from typical English summer, to the kind of weather I would expect on Shetland in an extremely bad winter. However, knowing that the ducks were craving to have their photos taken of them, I pushed on.

There were no ducks on the main lake, unless you can call a branch looking like a duck a duck, which technically you can't. However, all wasn't lost. I found a duck! An eclipsed male Red-crested Pochard,  on the next lake further up from the main lake, looking pretty annoyed at himself for not booking that holiday to the Caribbean a little earlier... 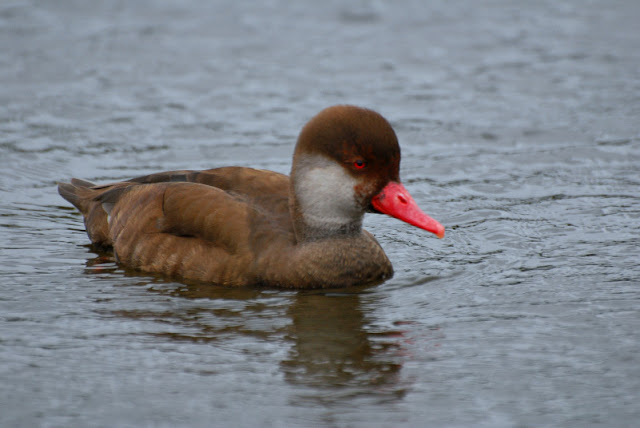 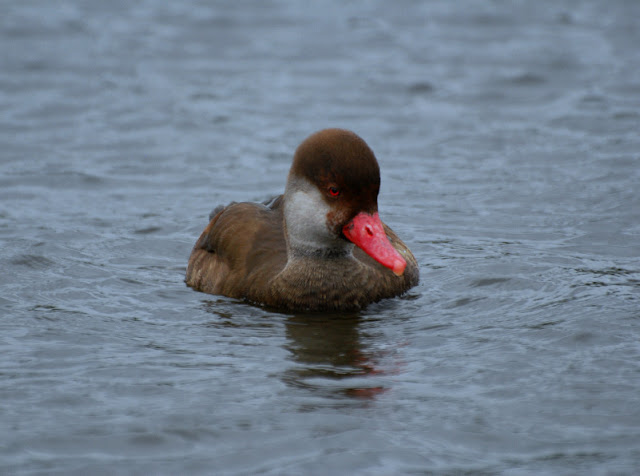 I'd post a photo of the branch to brighten up the post but I'm not very confident on the identification (it's been so long since I last saw a British duck I'm starting to forget what they look like). It could be a Red-billed Whistling Duck, or a Baikal Teal... probably blown in with all this weather.

To lighten up the subject, I look outside as I write this to a smidgen of blue sky. Who knows, prehaps that tiny seed will grow into a mighty oak, prehaps the sky will change colour overnight, and we will wake up to a new world... I doubt it. I think we've all learn't a lesson today- never go out in the rain because you won't see any ducks, so don't even bother trying.
No comments:
Email ThisBlogThis!Share to TwitterShare to FacebookShare to Pinterest

Sorry for the lack of posting recently, I know how much you have haven't been missing my fabulously  poorly stringed-together posts, amazing rubbish pictures and frequent occasional updates.
Anyway, I'm back, and more good news is that I found my preferred method of wildlife watching whilst in Menorca over the last 2 weeks. It included a deck-chair, cold drink, hot sun and preferrably a pool or beach as the habitat.

Our villa was situated on the south coast of the island, and like most of Menorca, the area extremely rich in wildlife, mainly due to the government rejecting many plans to build large tourist resorts and other attractions that could leave Menorca heading for the same fate as Ibiza (no offence Ibiza, and not that I don't like that kind of lifestyle).

With wildlife came photographic subjects, and one of the first birds to hit the camera lens was a Turtle Dove; a species I have yet to encounter in Britain, and with its current rate of decline, my chances of seeing it are getting slimmer. No such problem in Menorca however, where their weird and bloody annoying two note call would wake me up every morning! 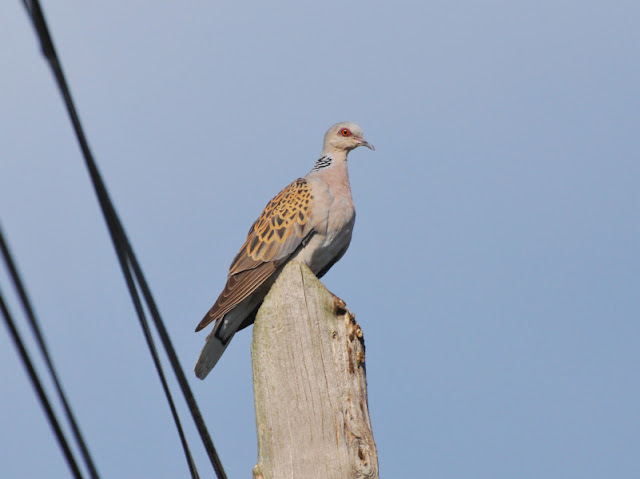 Another commoner in and around the garden was the Spotted Flycatcher, and every evening a family of six would congregate on the telephone wires outside the villa and flit around in the evening light. The problem was that they would usually appear just after the sun had gone down for a 10 minute period, and the light was not brilliant for a frame filling 300mm shot.

However, this shot was an exception, and I managed to catch the bird in good enough light to make it showable... 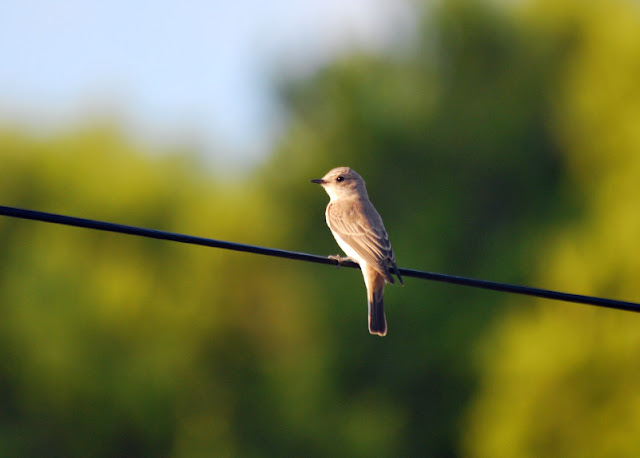 Whilst waiting for the Spotted Flycatchers to show up, my vantage point gave a good view of the sunset... 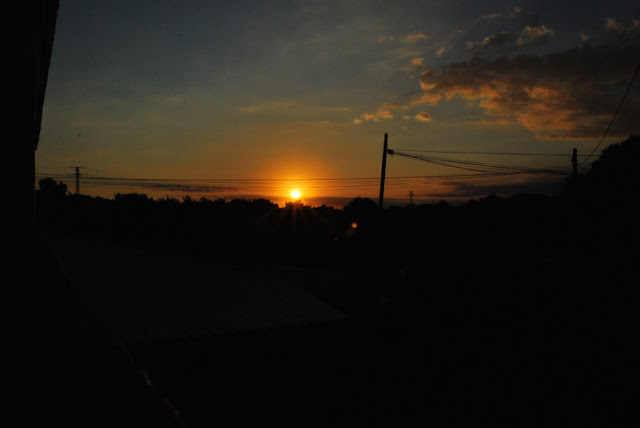 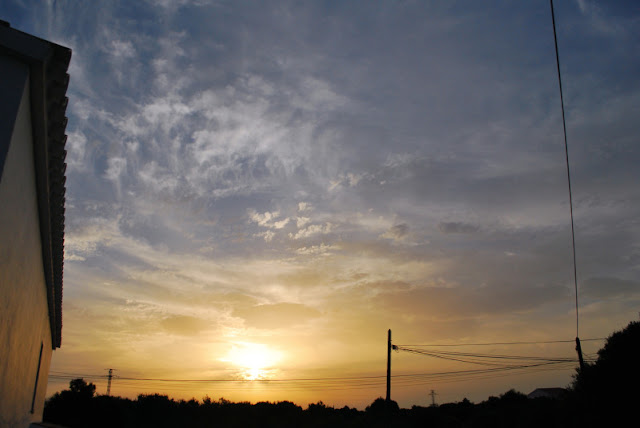 What we didn't realise when looking at the villa on the internet, was that they had a resident family of Hermann's Tortoise living in their garden. The tortoises had a mind of their own, and were constantly on the move, feeding off salad and roaming around the house like it was theirs. This family included at least two very young tortoises. To give you an idea of size, the baby on the left is not much bigger than the palm of your hand... dinky or what? 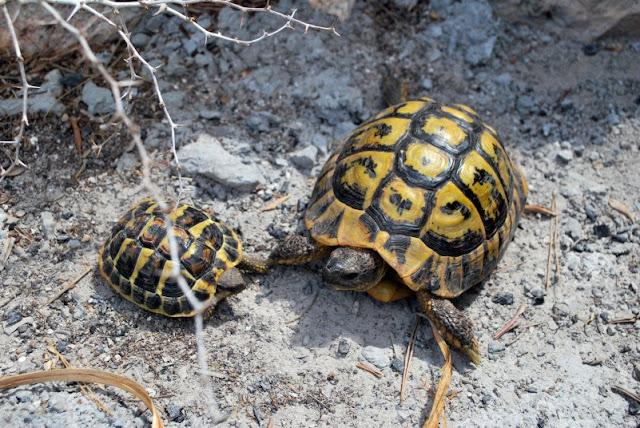 Talking about reptiles, as you'd expect on a hot Mediterranean island, lizards were abundant, but very hard to get close enough to identify, let alone photograph. Probably the most common lizard in the area was the Italian Rock Lizard, originally imported into the Balearic islands from surrounding Europe, being resident in Italy (would never have guessed!) and much of mainland Europe.

Occasionally, I would take a lizard by surprise whilst it was sunning itself in the glorious weather and it would give me a few seconds to take a shot (try and ignore the whappin' great green grass stem going slap bang through the middle of the shot. Typical)... 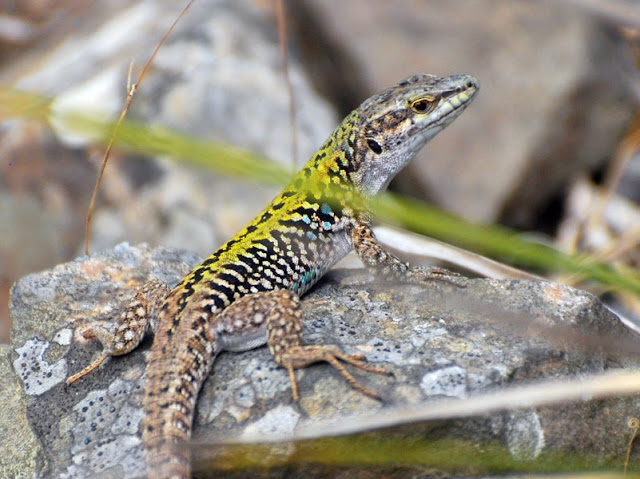 But it wasn't all about common species... oh no. Whilst scanning a wader scrape at Es Grau nature reserve, one of the largest of it's kind in Europe, watching Black-winged Stilts and a Marsh Sandpipers, I got onto a large, stocky Moorhen type bird with a stocky bill. There was no mistaking it... a Purple Swamphen!
A very local and rare breeding bird in Europe, where it is only found in marshy areas of the Balearics. Score!
Yeap, yeah... that tiny blob in the middle of your screen wading through that swamp is a Purple Swamphen, honest! And it is purple, not that you can tell from this awful photo... 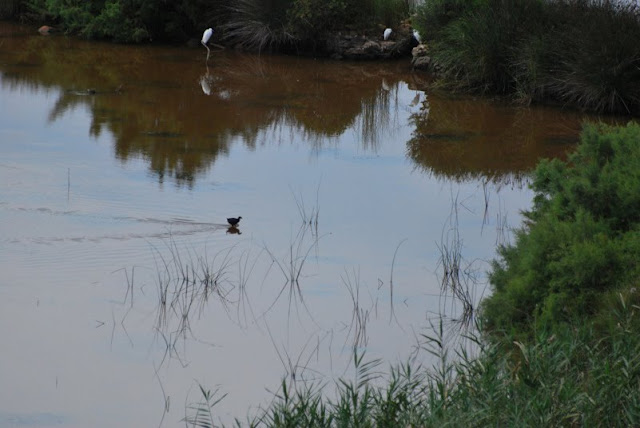 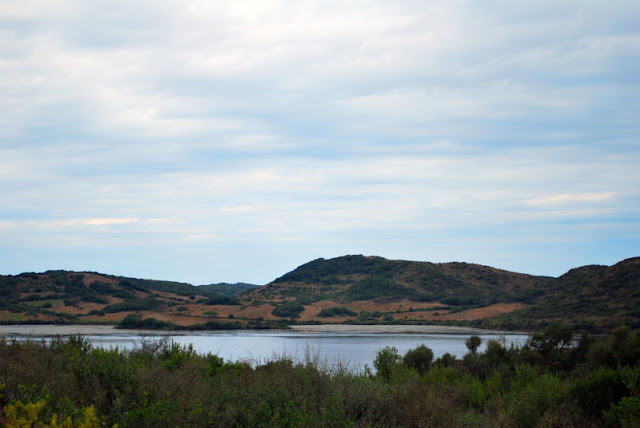 There were plenty of insects to photograph at Es Grau. Most of the butterfly species I couldn't identify, as I had no knowledge whatsoever of Mediterranean insects, and I even needed help identifying the following Common Blue and Speckled Wood (both common in Britain)...
Common Blue... 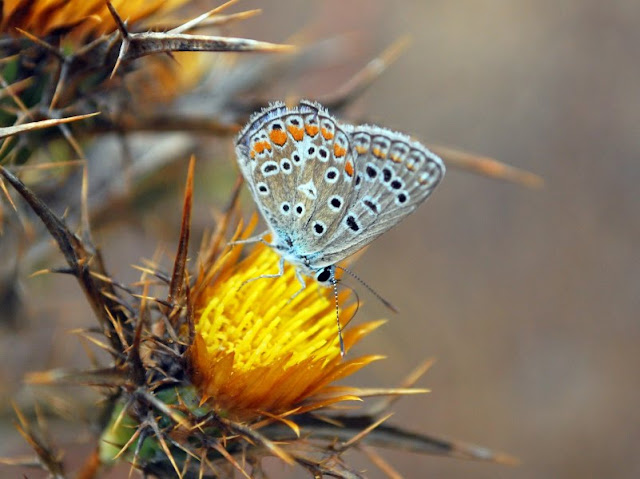 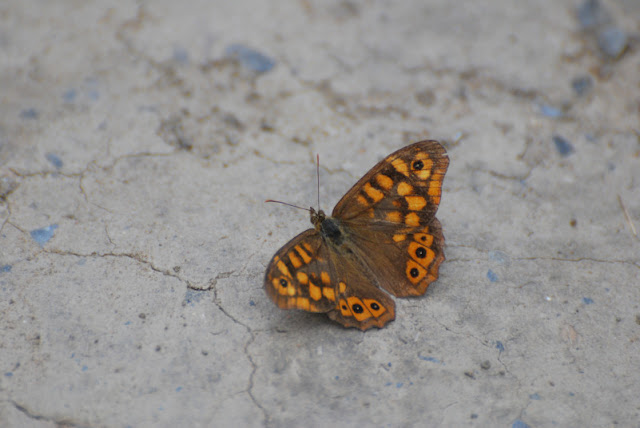 Just about the only damselfly I could identify, a Blue-tailed Damselfly. Relatively common here in Britain but one I've yet to see at home... 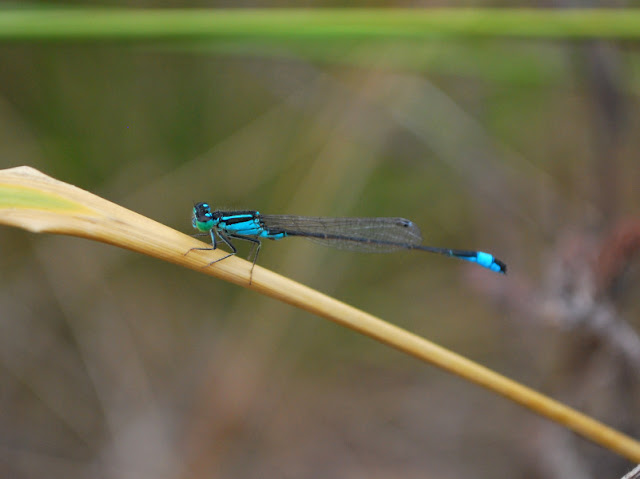 As the days went on, I found the amount of time I spent with the camera was decreasing almost as dramatically as the little Turtle Dove from Britain, and the amount of time I was spending on the beach was increasing. Before I knew it, the 2 weeks were up and I came away with a surprisingly empty SD card.
Sadly, many species missed the camera; Orphean, Sardinian and Cetti's Warbler, Egyptian Vulture, Black Kite, Hoopoe and Bee-eater are just some of the beasts that managed to vanish the second I pointed my lens in their face.
Ah well. All in all a very nice holiday, and you have to agree with me that chill-axing on a sandy beach with a cold drink, watching the odd Audouin's Gull fly by (along with plenty of birds... wink wink), is probably the best possible way to birdwatch... ever ;-)
3 comments:
Email ThisBlogThis!Share to TwitterShare to FacebookShare to Pinterest
Newer Posts Older Posts Home
Subscribe to: Posts (Atom)