Yeap, the white stuff has finally made its mark on the South East, in the form of the worst snowfall here since the last one last year. It was a struggle, it was a real struggle, but I just managed to get through the day, and I even went outside, despite the BBC telling me to stay indoors... I'm bad.

Sarcasm aside though, and I really like snow. Of course, its fun, but it also brings in the birds. Just from watching the garden for half an hour this morning, I managed a record high of 3... yes, 3 Chaffinches feeding in the Pyracantha, the 3rd recorded Song Thrush and a returning female Blackcap, that hasn't been seen here for 2 years- hopefully she'll stay for the winter and bring her husband along too. Of course, the birds don't have as much fun in this weather, and so it is important that you keep feeding them with high energy foods.

What with one college lesson at mid-day, the usual thing happened when I'm at home for most of the day; I found myself doing nothing for ages. One minute it was 10am, and the next minute it was 11. It's like when you give yourself an extra 5 minutes in bed, which quickly turn into an extra few hours. I soon became bored of a Geography essay on whether Mexican migration to America is beneficial or not, and found myself looking through a few more blogs than usual. One in particular caught my eye- Steward's 'From the Notebook'- and in particular his brilliant sketches of birds that he scans in off his notebook and posts on the blog.

Now I'm not usually an artistic kind of guy, but when I can be bothered, I try (and usually fail) to do a few sketches of some interesting birds I find myself watching- it helps me to brush up on my ID skills, should I happen to stumble across a rare bird whilst walking through Bushy Park.

Inspired by Steward's brilliant sketches, I decided to scan in a few of my own sketches for a laugh- I don't know what it is but I quite like peeking into other people's notebooks to see how they record.
Because you could get better out of giving a crayon to a 5 month of baby, I've added captions so you can identify each scribble... 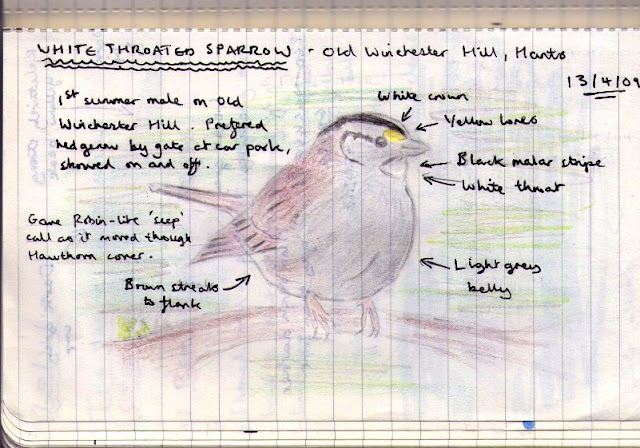 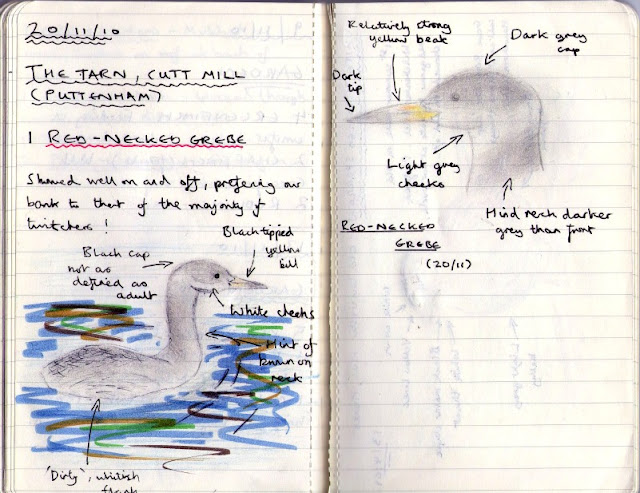 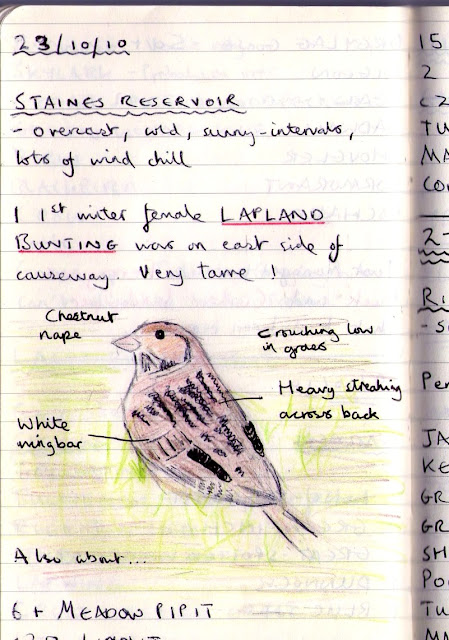 In other news, the Redcrestufted Duck (Red-crested Pochard x Tufted Duck) was strutting its stuff in Bushy Park the other day. However drunk, stoned or generally confused the parents were at the time of deciding to mix and match the looks of their offspring, I've got to give it to them, they really have created a smart looking duck and I hope it stays for the winter... 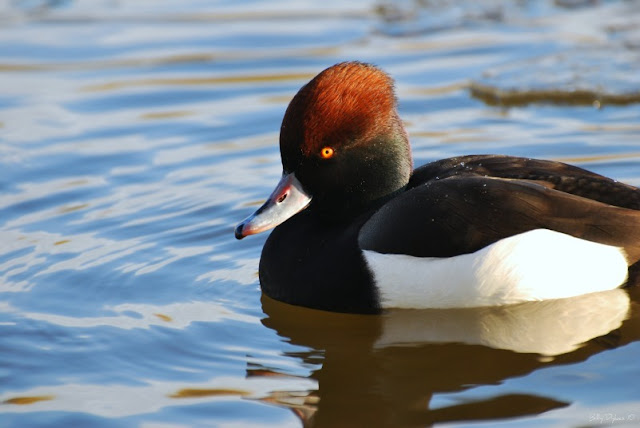 With more snow forecasted for tonight, the weather doesn't look like its going to get any better before it gets worse, or you could say it does look like its going to get better before it gets worse, depending on how you view snow. Bird wise, it could bring in something good into Bushy, like a Pomarine Skua, or Thayer's Gull, but then it also kills birds, and stops birders from birding... both of which are bad.

'Snow: good or bad? Discuss'... my next essay title, expect a downloadable version tomorrow morning.
Email ThisBlogThis!Share to TwitterShare to FacebookShare to Pinterest

That`s far from being a subtle hybrid, Bill. In your face, that one.

Thanks for the plug Bill, glad to have been an inspiration to someone! Keep up the notebook habit. The sketches are great and they will keep you learning about your subject. It makes you look much closer...

Dean- You should see it when the sun shines on it!

Steward- Thanks for stopping by, and cheers for getting me back into the habit of note-taking! :)