So here we are again. I'm back at my old desk, back on my old laptop. Your back at your computer screen, having waited so longingly for my return to blogging. As you may have known, I became a very lucky sod at the end of June with the offer of a month's volunteering at the bird observatory on Fair Isle- a stunningly remote island located between Shetland and Orkney, and one of the best places in Britain, if not Europe, to watch birds.

I like Fair Isle a lot; it's got the wildlife, it's got the community spirit, and it's got the unique scenery that combine together to make the island such a special place. Working at the observatory through the height of summer means you immediately avoid the ultra-competitive, rarity-obsessed egos that will arrive in the autumn, and thus are left with like-minded people who genuinely enjoy travelling to remote places to experience island life at it's peak, and who appreciate all aspects of the island's bird populations.

Taking it all in again... 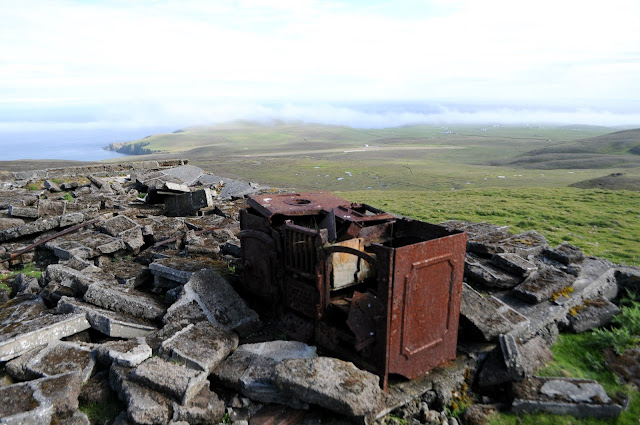 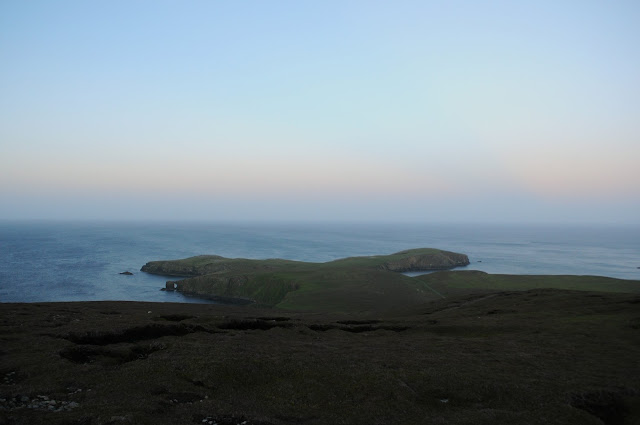 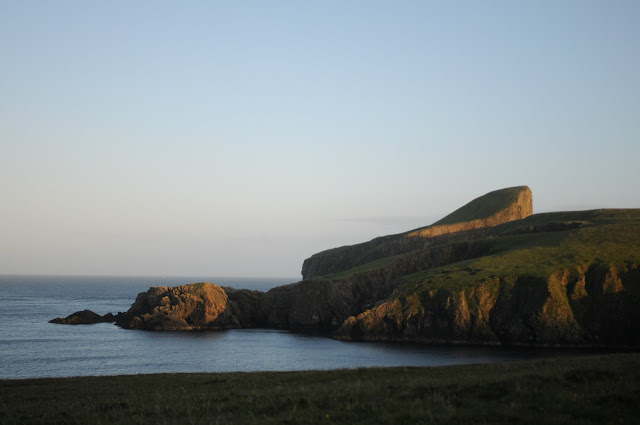 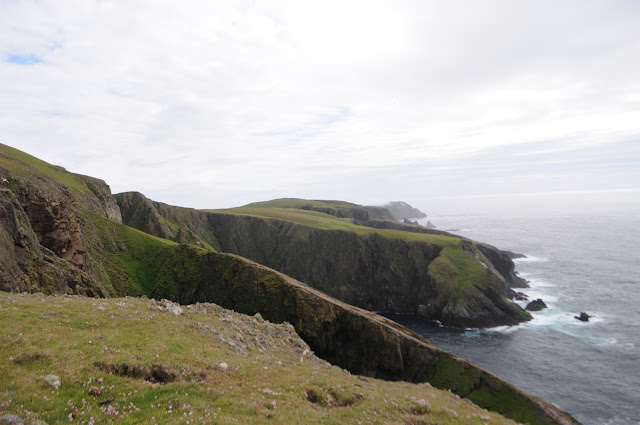 Not surprisingly, summer seabird work took up a large part of the daily schedule during my stay. This included monitoring the island's breeding Gannet population, mapping Bonxie nests, mist-netting and colour-ringing Puffins and their chicks, as well as attempting to locate chicks from the island's dwindling Kittiwake colony. When the sea state allowed, we'd take to the water in a small inflatable Zodiac to carry out a complete survey of the island's cliff-nesting Shag population. Black Guillemot ringing sites also required the use of the boat, and the search for birds would often lead us into remote geos and caves, each one more stunning than the last. The tranquil waters played host to solitary Lion's Mane Jellyfish and other weird cave-dwelling jellies, whilst Grey Seals would show off their curious side, whizzing about just below the boat. Zodiac sessions were always a good laugh, and usually ending in us attempting ridiculously treacherous landings in remote coves to beach comb for as much storm-blown tat as possible. Tree branches would take priority, then buoys (they made great spacehoppers), followed by anything else that looked vaguely interesting. An inflatable boat full of cargo made hanging on during the return journey slightly more interesting!


Rarity hunting certainly isn't the focus during the summer months, but it's quite hard to visit Fair Isle and not cash in on something unusual. The most spectacular rare came during a manic Storm Petrel ringing session, when a small group of us, led by seabird officer Will Miles, found a calling Swinhoe's Petrel at stupid o'clock in the morning. Considering that this represents a 1st for Fair Isle, 2nd for Scotland, and 6th for Britain, you can begin to imagine the amount of rejoicing (and swearing) that took place during and after the event. A Leach's Petrel also flew into the net that night, and if you happen to see a very badly ringed bird flying around the coast this autumn, it's probably mine. A truly solid night, with the Swinhoe's doing the right thing, and giving itself up to be ringed later in the month for all to see (apart from your truly, who had left). It was a brilliant feeling to be able to head outside every morning with no idea of the surprises that might be waiting for you around the island; I stumbled across the likes of Western Subalpine Warbler and Long-eared Owl whilst doing the daily rounds of the cliff faces and crofts, and a few days of southerly winds in early July brought in another mad rarity- this time in the form of a butterfly- when myself and the obs' Ranger, Teresa, found a Green-veined White in South Harbour. At the time I shrugged it off as a common migrant and didn't bother reporting it, only finding out later that evening that it was actually a 1st for Fair Isle and 2nd for Shetland!

When we weren't Storm-Petrel ringing, or partying (in hardcore Fair Isle fashion), a few of us took it upon ourselves to run the moth trap in the observatory garden. Catches were never high, but did include large numbers of the colourful moorland specialities; Map-winged Swift and True Lovers Knot; both of which always went down well with the guests, as did these two unfamiliar faces...


The long daylight hours during the summer months brings plenty of physical tasks for the crofters, and the established relationship between islanders and the observatory means that staff are happy to provide a helping hand. Rounding up the island's thousand odd sheep for shearing requires the help of everyone on the island, and was certainly eventful- sheep and people running everywhere- but a great laugh all the same. Expensive summer cruises would arrive every week for early morning strolls to see the Puffins, and it was a surprisingly hard job keeping guests from falling off cliffs in their endless pursuit for the 'best' photo of one.


Like it always does, my last morning came around like a train (a fast train, as opposed to a slow one), and I reluctantly slipped off at 7am on the Good Shepherd mail boat back to Shetland, ready to catch the ferry back to Aberdeen that evening. No more breathtaking cliffs, no more Gannet colonies, no more Stormies. It was sad saying goodbye, but I was coming away with all the memories (some best left untold) and experiences. When you combine the four great things in life- birds, beer, moths and great people- the outcome can only be good, and it's safe to say that spending a month of my gap year in the company of like-minded peeps on Fair Isle is the best experience of my 'career' so far. There's no doubt I'm going to carry on with this volunteering business whilst I'm at university; maybe either returning to Fair Isle next year (if I can find the cash), or taking my chances somewhere closer to home- the Welsh islands of Skokholm and Skomer aren't a million miles from where I'll be studying, and I've been told that they have the odd birds there sometimes, so who knows...


P.S. For any youngsters reading, I received a generous grant from the Fair Isle Bird Obs Trust to fund my month's stint. If your considering conservation volunteering- and enjoy remote places- speak to the observatory about the John Harrison Memorial Fund, or apply here. It's aim is to provide financial support to young people (16-25 years, before you ask) who are interested in working there, and you won't regret it if you do.
Email ThisBlogThis!Share to TwitterShare to FacebookShare to Pinterest