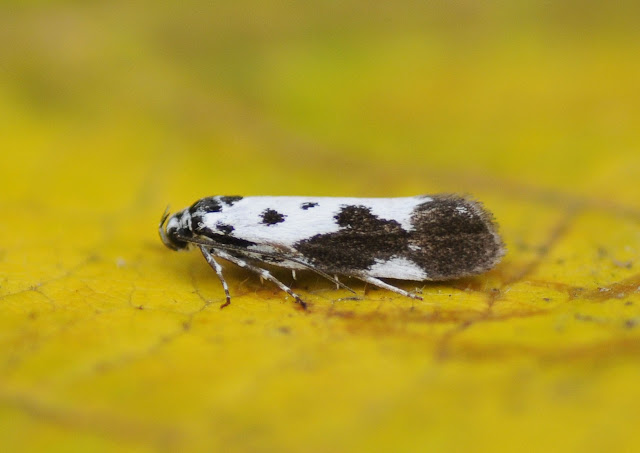 I had a cheeky feeling something good was due in the moth trap, but with torrential downpours making the last few night's trapping sessions particularly challenging, I certainly wasn't expecting this beauty. The moth looked interesting the moment it settled on the sheet suspended above the trap, and a quick search on UKmoths revealed it to be Ethmia quadrillella, a scarce species confined mainly to wetlands and fens in and around East Anglia. I flicked through the distribution maps in the Smaller Moths of Surrey atlas with excitement, and sure enough there was a blank space on the page where the species should have been. After further email correspondence with the big guns (county recorder Jim Porter and moth guru John Langmaid), it turns out I've got me the first record of this species for Surrey, which is swell and all, but still leaves one nagging question... Where has it come from?

Is it part of a previously unknown breeding population in the southern counties that has only now made itself known in a suburb in Surrey? Is it a one-off wanderer from known strongholds further north, or could it be a genuine immigrant from mainland Europe- following in the footsteps of Surrey's 'first' Jersey Mocha which reached the garden during peak migration season in late August 2011. I'd like to think that the time of year, combined the fact that its arrival coincided with that of other well known migrants into the country (Clouded Yellow, Diamond-back Moth, Silver Y) would make a pretty strong case for it being a genuine international migrant, but it's all speculation, and that's one of the great mysteries of mothing.