There was an air of excitement in the ranger's office this morning. It's been a busy week of early morning birds surveys, teaching and coasteering, but today Dom Price from the Species Recovery Trust was over at Durdle Door to survey Early Gentian, and we'd all left the date free in our diaries to head up there and help him count them.

In typical Lulworth fashion, no sooner had we pasted on the suncream than the sun disappeared and the sea fret drew in, but the thought of a day spent looking for a rare UK endemic plant on the slopes above a wondrous limestone arch was enough to extinguish any bad feelings about the weather (which got better again as the day went on!).

With the help of Dom's keen eye and a trusty handheld GPS, we found healthy populations of Early Gentian at several grid references where they've been seen before in similar surveys back in 2008 and 1998. These plants grow in only the very shortest turf where they don't have to compete with taller grasses, so to find them in the same spot over consecutive surveys is proof that the livestock grazing regime up there is working. 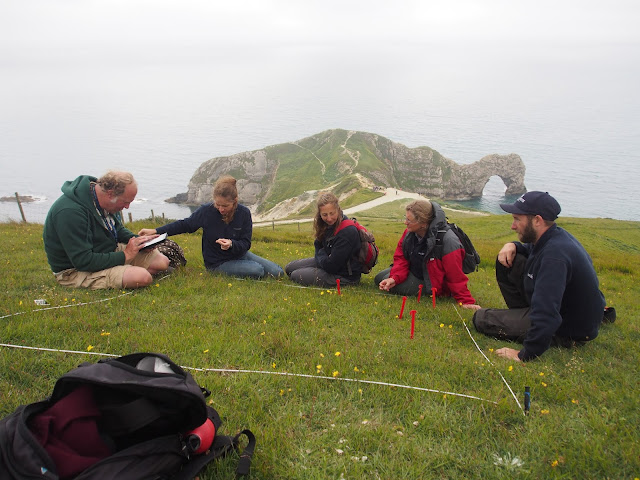 Quadrat sampling with a view 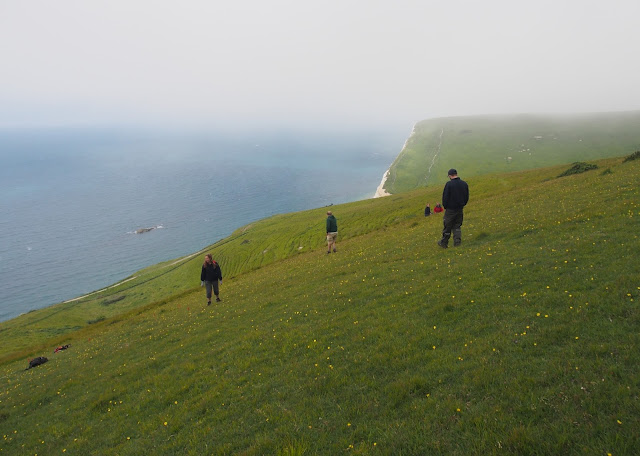 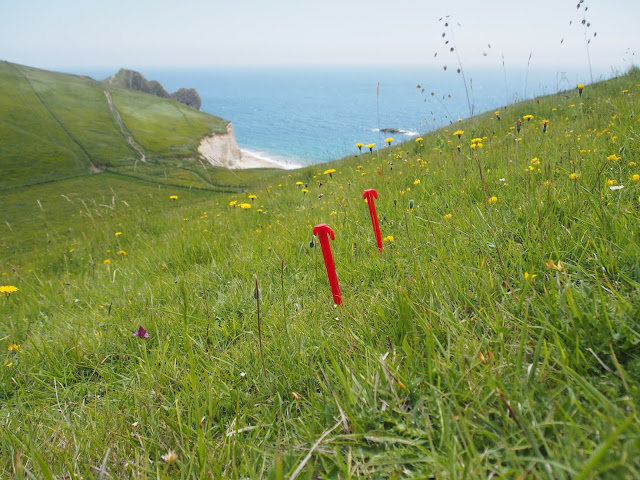 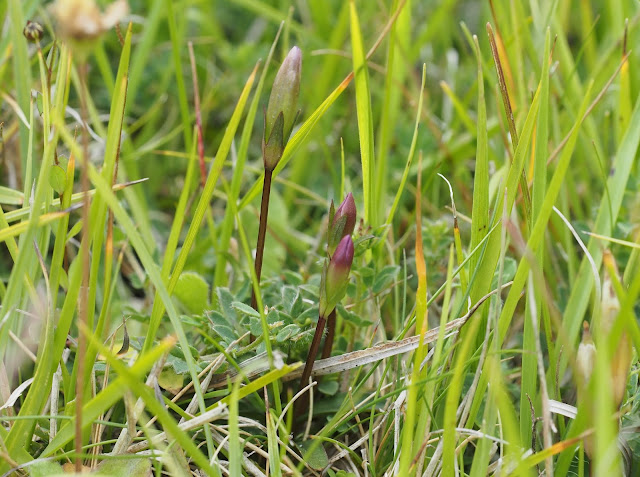 Despite growing in very short turf, it's an inconspicuous plant

Interestingly, some of the largest clusters were growing immediately alongside the steps on the South West Coast Path where it leads down to the Cove, in an area that they haven't previously been recorded and that isn't often grazed. This busy route between Lulworth and Durdle Door is walked by thousands of tourists every summer, and the constant footfall has effectively done the same job as grazing cow - kept the grass short! Footpath erosion isn't usually something to rave about, but in this case it seems to be beneficial! 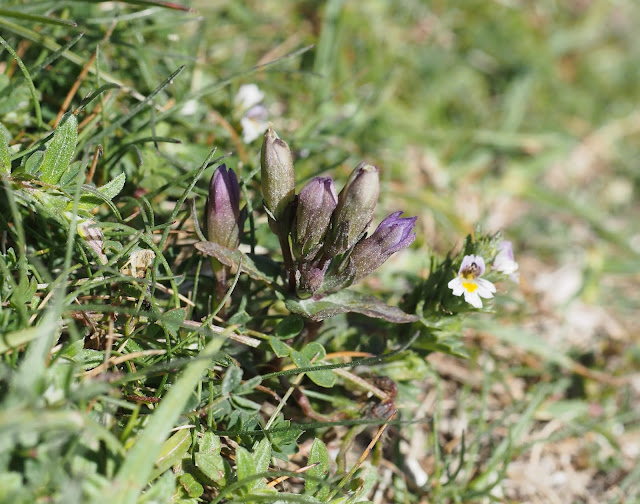 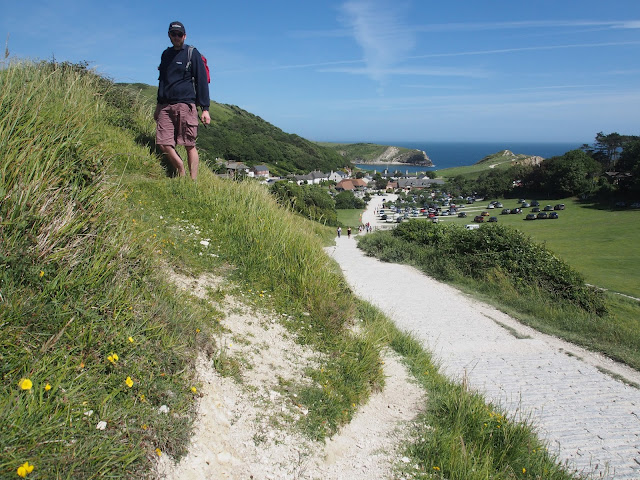 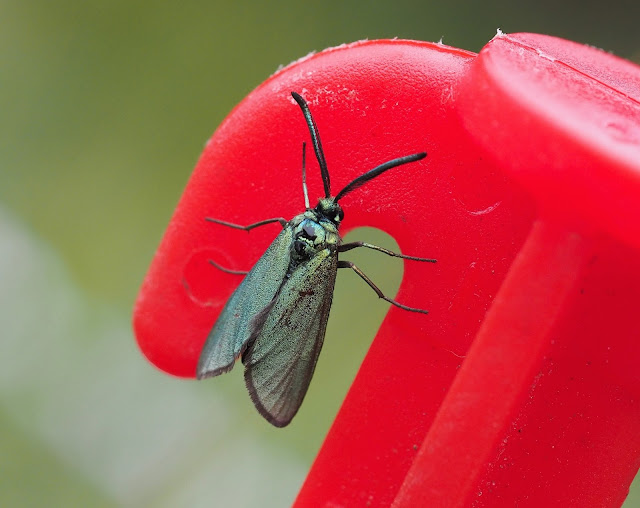 A couple of dazzling Cistus Forester joined in the fun 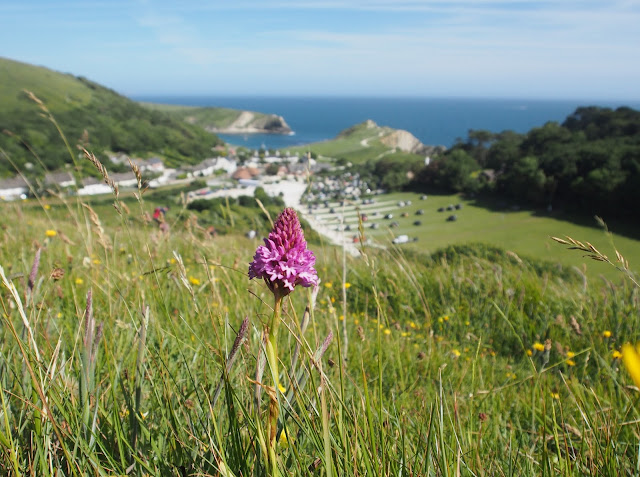 Pyramidal Orchid
Email ThisBlogThis!Share to TwitterShare to FacebookShare to Pinterest

Bill, what an amazing place to live and work in - a part of the south coast that I have rarely visited. Enjoy...

It's pretty cracking here Steve! I'll have to make the most of it though - only here until August.

Just spent a few days in the area walking the hills and loving the great selection of flora. I found one of the Gentians on the top of the hill leading to Durdle Door. It found me really. I just sat down to admire the view and catch my breath and surprise surprise there was a Gentian next to me. Even though the sun was blazing the flowers had not opened and lookid that it would not open either. Loely surprise