Emperor in the oaks

I recently managed to have a catch up with Dave Boyle, ex-warden on Skomer back in the UK briefly to renew his visa before heading out to the Chatham Islands to co-ordinate conservation efforts for the endemic Chatham Petrel. Dave was keen to catch up with the enigmatic Purple Emperor whilst back in the country, and the offer of a lift was too tempting for me to resist.

We arrived at Alice Holt Forest just as the first rays of morning sunlight began to scatter through the trees, warming up the woodland ride along which Purple Emperors are known to descent down from their usual haunt high in the mature oaks to feed on salts kicked up from the path. In the previous few days, we'd caught wind of news from the forest that Emperors were actively feeding on the ground, perching on people's shoes and even landing on the head of an unsuspecting dog, so hopes were high that we'd be treated to a good display.

After a chilly start, by mid-morning the forest had heated up considerably, enticing White Admiral, Silver-washed Fritillary and Purple Hairstreak onto the wing at canopy level. Every large butterfly silhouetted against the sky had us craning our necks upwards in the hope that it was a Purple Emperor, but after a couple of hours standing in the 'hotspot' area without any luck, it became apparent that we needed a new strategy, and so we split up to cover more ground.

I retraced our steps towards the car, and it wasn't long before I caught a glimpse of a large butterfly effortlessly weaving in and out of the oak trees above me; gliding and swerving erratically in a manner that I'd never seen before from a butterfly. There was no doubting it - a Purple Emperor! I called Dave over, and he managed to fire off a couple of photographs with his telephoto lens, including this stunner: 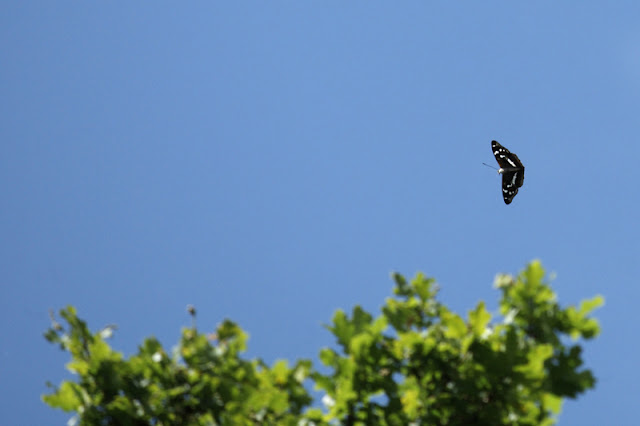 Dave managed to perfectly encapsulate our typical views of the Emperor in this photo!

Understandably, the Emperor was more interested in defending its patch of tree from rival males than worrying about providing us with a photographic opportunity, but every now and again it would take a rest on a leaf; catching the sun and showing off the stunning iridescent purple markings on the upperside of the wing.

Satisfied with captivating if tantalising views of Purple Emperor, we headed to the nearby Hankley Common - one of Surrey's finest examples of lowland heathland - and no sooner had we started walking than Dave calmly announced that he'd noticed a Sand Lizard basking amongst the heather in front of us. Having searched unsuccessfully for them on previous family holidays to Dorset, it took a double-take before I clocked that I was finally watching one of the UK's rarest reptiles in Surrey - only a few feet away! 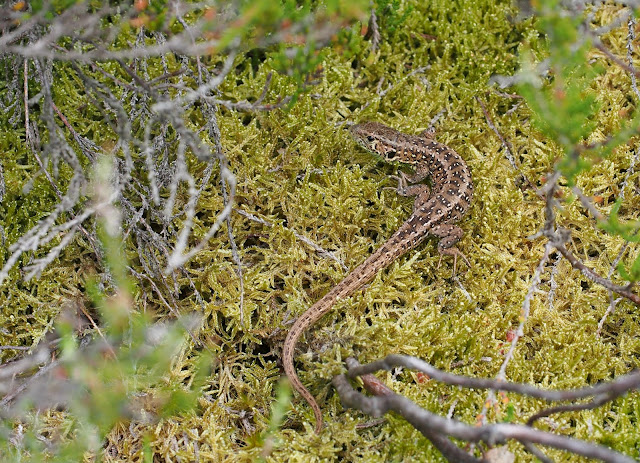 Of course, I couldn't leave without a bit of micro-moth action... 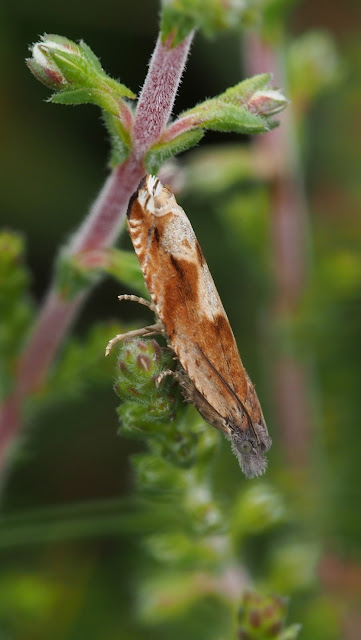 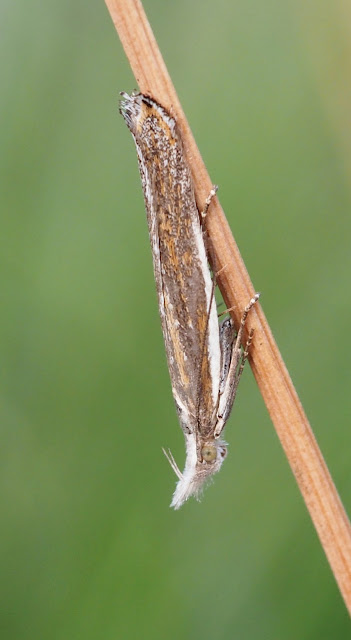 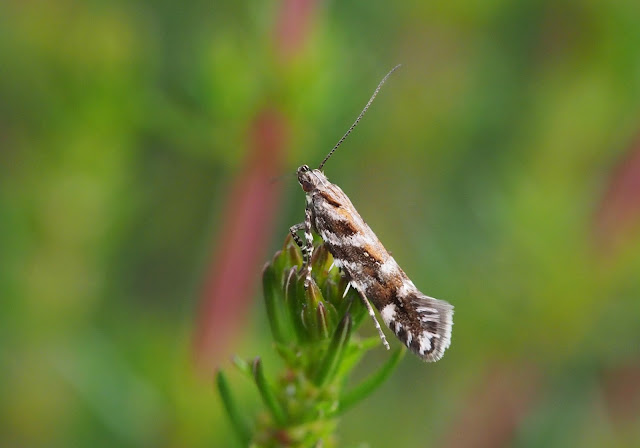