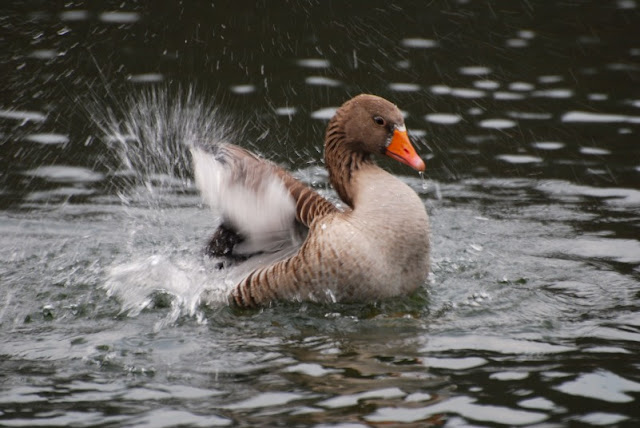 It has almost become a yearly ritual for me to go and see Goosanders at Painshill Park, that use the highly originally named lake; 'The Lake' as their wintering grounds. A year ago on Sunday, I managed 4 males and 1 female at the site, so I decided to take a trip down there on Satuday to see whether they had stuck to the same lake this year.

I wasn't disappointed, and a female G-sander soon showed itself in the exact same spot were I had left the birds last year. She was followed by a very smart looking male, and I enjoyed rubbish, distant views of the birds as they went everywhere we didn't.

Further down the path, I suddenly found myself staring at what looked like a smaller than average Greylag, with a flock of normal sized Greylag Geese. As I got closer, the bird moved into the water, and it became apparent that it was in fact a Pink-footed Goose. This isn't the usual species you'd expect to find in Surrey, but at first it didn't occur to me as anything other than a part of the park's collection, put there to confuse and temporarily excite birdwatchers. Then I realised there had been a relatively well twitched Pink-footed Goose of unknown origin in flooded fields a few miles away back on the 18th January. Many of the top Surrey listers had visited the fields and ticked off the bird, and I was getting anxious. Would I have to complete a dreaded rarity form? How would I describe a Pink-footed Goose? .... Goose like? Pink? With feet? It was all getting too much for me.

I watched the bird for a little while, but it tended to stay out in the middle and far edges of the lake furthest from us, so we moved on with a few images on the memory card to have a proper look at back in the warmth... 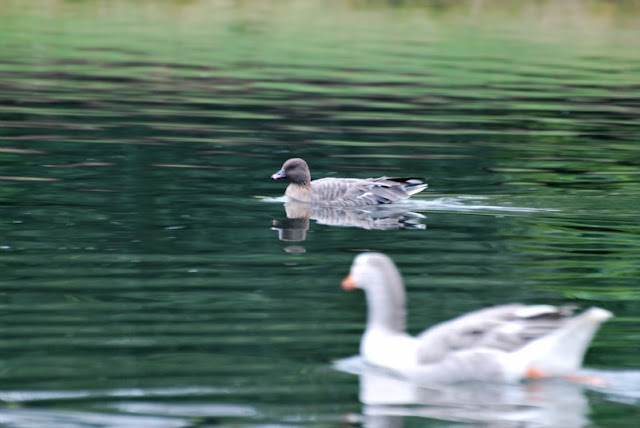 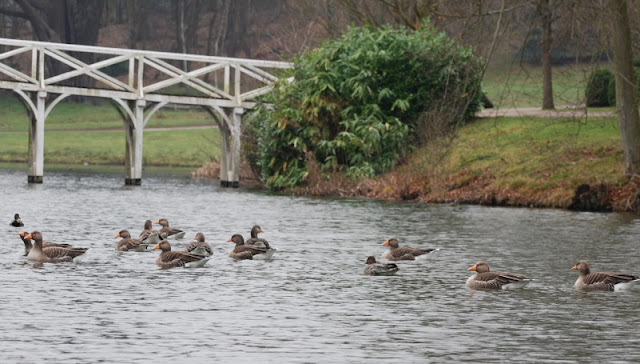 Spirits were dampened shortly after a number of gun shots went off an adjacent field, and I noticed a Greylag Goose running, and attempting to get off the ground, without succeeding. It was running quite fast, and had clearly been shot in the wing, stopping it from going airborne. The bird scrambled down a bank, across the river separating the surrounding fields from Painshill, and up the bank into the undergrowth of Painshill Park. The hunter appeared shortly afterwards looking for his 'kill', but after searching for a bit, he couldn't, and was never going to find it, so walked off. We found the bird in an inaccessible area of undergrowth just above the bank, in shock, shivering and clearly in pain, and tried to force it out onto the path and into the lake where it had the better chance of being noticed, to no avail.
The dying bird, hiding in the undergrowth. What is the point in shooting this for fun? 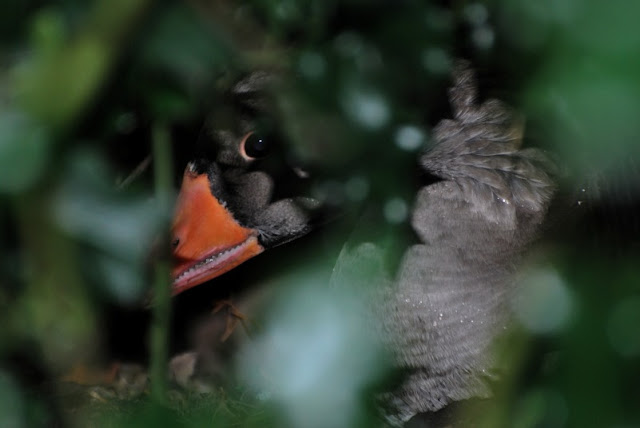 I understand that shooting is a well practised upper class past time, and this man could obviously not shoot the bird in the Park. When done responsibly, hunting can also sometimes benefit bird populations. However, with the recent scrutiny of the subject on BirdForum, it really does bring into question the morals of this 'sport'. I'm sure that, in the same way that there are abusers in the twitching business, it is only a minority few giving the majority of hunters a bad name- not that I agree with what they are doing in the first place. Sadly, we couldn't save this little guy from its fate.
Back at home, and after a bit of research, and contacting one of the Surrey county recorders, it turned out that I had relocated the Pink-footed Goose last seen in the area a few weeks back. The problem is that the origin of unusual or scarce wildfowl is often debatable, with so many birds kept in collections around the country. The jury is still out on the Pink-footed Goose, let's just hope its not shot. It would have made a great 26th addition to my year list, but I'm not doing one, so it won't. So there.
Email ThisBlogThis!Share to TwitterShare to FacebookShare to Pinterest

Very nice blog and pictures! I will keep my eye on it from time to time.