Who would have thought that such a harmless hobby could get so out of hand? When I first started, I knew I was getting myself into a commitment that may ruin my life (and my sleep pattern) for ever, but I never thought it would tip me over the edge so soon. At first I managed to keep it to a minimum, but it wasn't long before I became hooked on it all. Night after night, I'd be out there, lurking in the shadows with them until the early hours, but it seems that last night everything just went too far. They made me do it, they did. Those damned moths made me do it! An Oak Processionary moth to be precise, and last night I broke the law by putting it in fridge.
Due to the caterpillar's tendency to demolish any oak tree it can get its mouth around, and its ability to release extremely skin irritating microscopic hairs from its back, this species is very high on the list of species that many of the top environmental agencies in Britain want dead. Its not native, and although the adults do occasionally accidently come over from mainland Europe, the caterpillars of the species are thought to have arrived with a delivery of foreign oak trees into Kew Gardens. The moths are feared so much by the government, that there is even a law which makes it illegal to knowingly keep or store the moth.
I realised this a little too late after I carried out normal practise by putting the moth in the fridge (to calm it down ready for photography later of course- who do you think I am, a moth torturer?) and thus I have become a criminal.

All because of this ugly (but flippin' rare) little bugger... 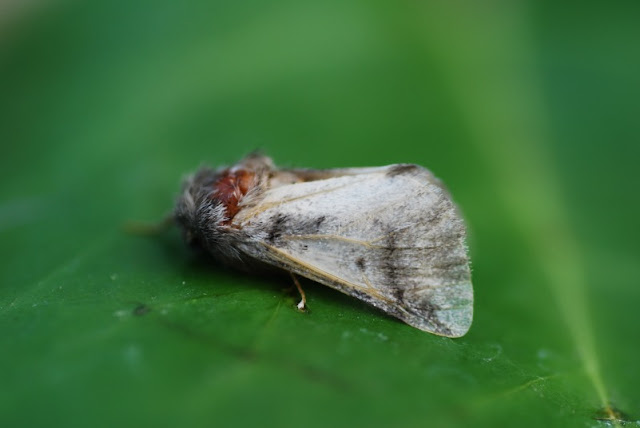 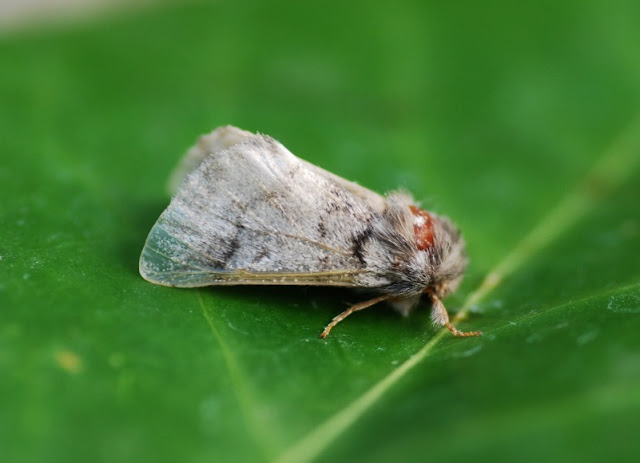 I can only assume its a matter of time before the authorities will be onto me, and I wouldn't be suprised if MI5 don't already have their top covert Human Intelligence Agents watching me as I type this. I guess the best thing to do will be to go into hiding... preferably somewhere with a really good list of moths to boot. How about Portland? Or maybe Dungeness?
Hopefully I can keep you updated on my progress using these new internet connections they have on mobile cell phones nowadays, but I wouldn't hold out any hopes.
May my last words to you be this: don't start moth trapping.
Email ThisBlogThis!Share to TwitterShare to FacebookShare to Pinterest

I hope you are not serious when you say normal practice to put the moth in the fridge, implying you often put insects in the fridge. This is a nono with any serious nature phtographer. If you do, then please don't do so any more. If you don't, I apologize on misinterpreting what you said.

Sorry if I've touched a nerve, but putting a moth in the fridge for a few hours is normal practise for any entomologist. Its set at a perfect temperature, and is dark enough to keep the moths 'sleepy' enought to allow for a quick photograph or two the next morning. I can assure you that they warm up and fly away within minutes (or seconds as is the case with most Pugs and micros!).

I only do this with moths from the garden, and any insects I find in the field are photographed in the field.

Hope this has reassured you slightly?

Hi Bill, enjoyed your site. I was a little disappointed that whoever it was that made the comment linked here did so anonomously. I wondered what made him state its a NO NO for "serious photographers". If he knew any serious moth photographers he would know it's a common and harmless practice. Keep up the entertaining work.
Brian