A Hairstreak in a Spot of Bother

A Hairstreak in a Spot of Bother
With its iridescent, golden bordered green wings, the Green Hairstreak is one heck of a smart looking bugger. Emerging in mid-spring, these butterflies are on the wing until well into June, but to see them in their best outfit, its best to catch up with them in spring.

I was hoping to see one when I went for Grizzled Skipper back at the beginning of April, but never managed to, so this individual on Denbies Hillside the other week was a welcome surprise... 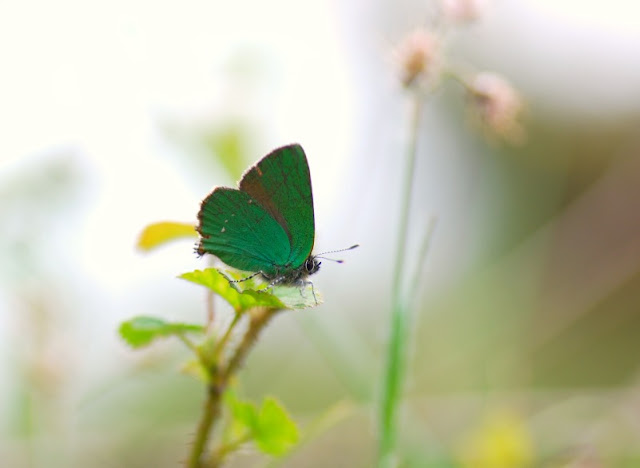 When it turned its side to the sun, a stunning coppery greenish tinge would show, but this was hard to capture on the camera, especially when you are lying down, on stinging nettles, with a butterfly that has a habit of going walk-about on flower stems rather than keeping still. 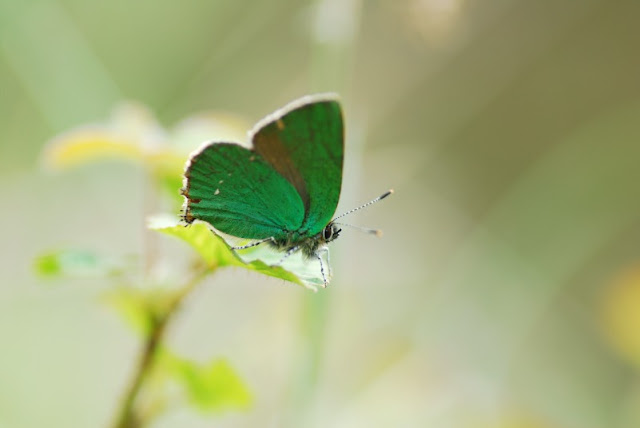 Whilst I was photographing the butterfly on a nearby bluebell, Mr Green Hairstreak's habit of walking about aimlessly over flowers got him into a bit of a pickle. He had walked onto a bluebell which was already occupied by a naughty little Crab Spider, that was looking for his lunch. 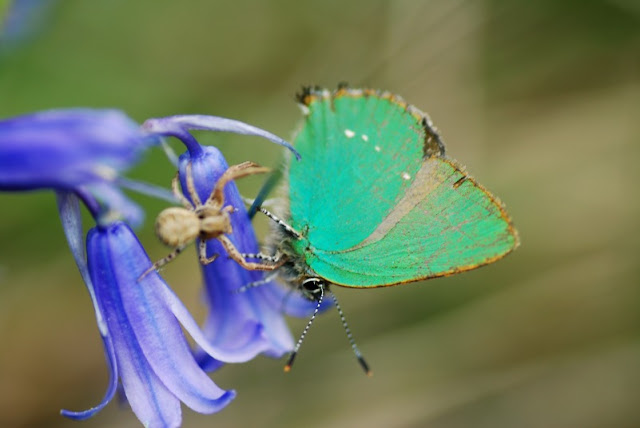 Luckily though, I was on hand to take pictures of those last moments of Mr. Green Hairstreak's life, and just as the Crab Spider was about to pounce, the sound of the camera shutter shutting sent the little butterfly into the air, and out of harms way. To be honest though, a spider pouncing on, killing AND eating a Green Hairstreak would have made a pretty decent shot wouldn't it?
Email ThisBlogThis!Share to TwitterShare to FacebookShare to Pinterest

Saw a few lovely Green Hairstreaks at Banstead Woods yesterday along with Dingy & Grizzled Skippers. Hoping to pin down Purple Emperor and Silver-washed this summer :-)

That reminds me, I better be getting out for Dingy Skipper soon, one of my favourites. Good luck with Purple Emperor and Silver-washed Frit, the latter will be guarateed at Bookham Common during the summer. Let me know if you track down an former!

Great pics of the Green Hairstreak. I too enjoyed some good sightings of Green Hairstreak recently & have to agree that they're certainly are a good looking little butterfly.