A few posts back I might have slipped in the fact that I was getting quite close to the wildly unimpressive milestone that is the 500th species of moth to be found in the garden. I'm not a massively organised person, and have never managed to commit to logging sightings in notebooks. I'm also pretty rubbish at keeping lists in general (explaining why I'm not a massively organised person), so the fact that I've managed to keep track of 500 different things would probably be more cause for celebration that the total itself.

With three consecutive nights of very mild, calm and cloudy conditions- perfect weather for moths- the 500th species quickly fell into place in the form of an unassuming Yarrow Pug. As with so many 'nationally scarce' moths that reach the trap, Yarrow Pug has increased its range in the Thames Basin in recent years, and is now locally common in small areas of London- t'was only going to be a matter of time before it dropped into the garden. 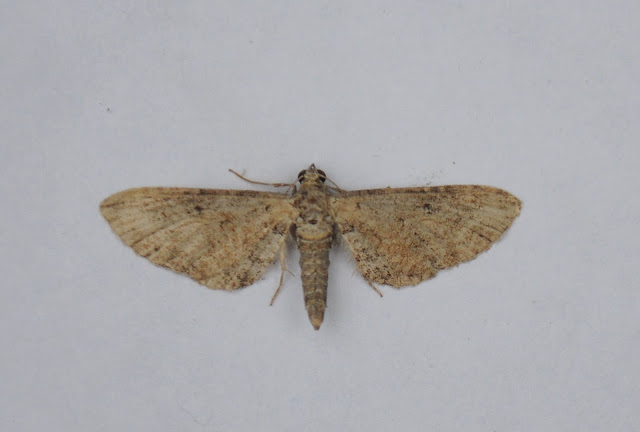 Moths are ace, there's no doubt about it. I've made a big deal out of it all, but 500 species is a very average haul for a garden. Most normal-sized gardens in the country could easily harbour upwards of this total- it's just a matter of  getting out at night to appreciate them, rather than wondering whether or not they're going to eat that knitted sweater that your mother-in-law made for you, when let's face it you don't really like it anyway. It's about two sizes too small, and you specifically asked for a chequered pattern, not diamonds.

If you haven't checked it out already, I've added the updated garden list on a separate page here- it's a pretty intense read.
Email ThisBlogThis!Share to TwitterShare to FacebookShare to Pinterest