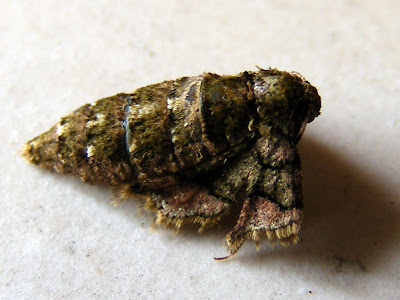 ... No, I haven't pulled the wings of it. This is a female Dotted Border (decided to go for just 'large' photos today instead of 'X-Large'. I think you can agree with me when I say an extra large of a wingless moth is a bit in-your-face!) which I saved from frying on the garden patio. The Dotted Border is just one example of a number of species of moth where the females emerge from the cacoon totally wingless and flightless.

I've never seen a 'wingless' female moth before and was quite interested to know why the females are wingless. What benefits could it have and wouldn't it make them more vulnerable from predation? Apparently, this saves the female energy for egg producing as it doesn't have to waste energy flying. Also, it is the males that will come to them, and the females need not stray from the safety of their cocoon before the male finds them.

Ready for her man... 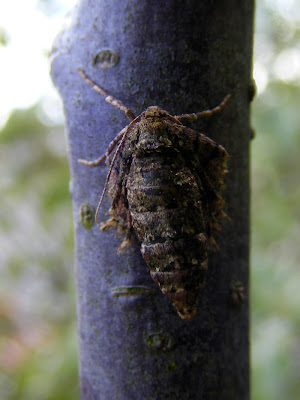 So now you can go back to whatever you were doing, knowing why some female moths are wingless. What more could you want to know?
Email ThisBlogThis!Share to TwitterShare to FacebookShare to Pinterest

I'm so pleased know what it is.