If you were wondering why I haven't been posting in a while, it's because I've been staring at this photo constantly for the last two weeks, not believing I've caught this moth... 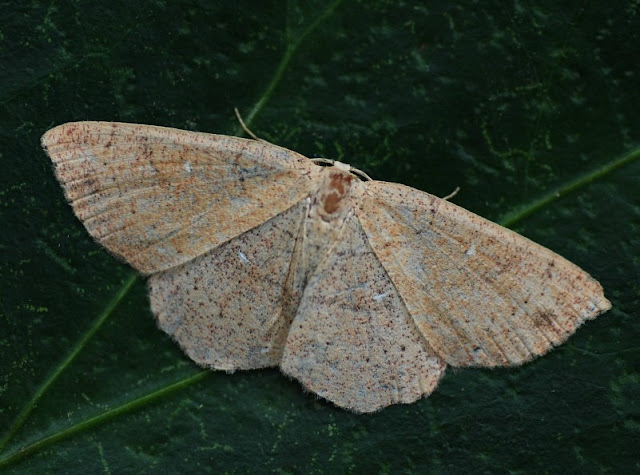 For the night dwelling moth-trappers amongst you, I'm sure this moth will need no introduction, but all other normal people, this is a Jersey Mocha; but not just any Jersey Mocha... only the first record of Jersey Mocha for Surrey.﻿ According to the literature, it's a rare immigrant to Britain, that occasionally gets blown off course, first being recorded here in 2003.
Having this one in the garden the other week suddenly made me wonder- really just how rare are these species we would class as rare vagrants? How many potentially 'new' species to Britain have simply gone under the radar? How many Jersey Mochas have passed through Surrey un-noticed before I caught this one in the garden? Thousands, I bet.
And the scene is the same with birds. If you ever need to know the best way to make a twitcher emotionally unstable in a matter of seconds, just remind them about the Canada Warbler that will be happily singing away in an unknown hedgerow, in an unknown part of the British countryside as you speak; or the Black Woodpecker, nibbling away at some anonymous Oak tree somewhere, never to be discovered.
So get out there and start looking... although preferably not in Surrey, and preferably not in the form of a moth trap. I don't like competition.
Email ThisBlogThis!Share to TwitterShare to FacebookShare to Pinterest

Well done on the moth mate but it is a shame that you're not getting out in the field much. More young birders are needed. As cool as moths are, finding a 50th record of a bird in Surrey would be 100x more exciting than any insect, trust me.

I've been taking some interest in the moths that end up in the corridors of my block of flats, best so far is a Rosy Footman.

Bob- Cheers, you can say that again!

David- Your right, I need to get out in the field more for birds. Hopefully I'll have a bit more time in October to get a bit of twitching done.

Keep up with the moth watching, Rosy Footman is a beaut. I've added your moth blog to the Surrey Moths + Butterflies link list.

I am not an expert in moths,just I can tell that is a nice photo of it!
Nice day.